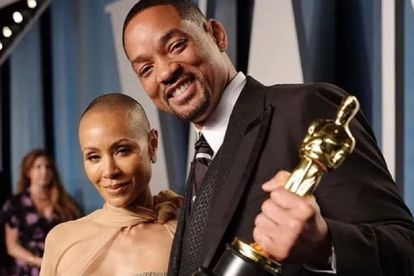 Veteran actor Will Smith and his wife, Jada Pinkett Smith, are reportedly headed for a divorce after being married for 25 years.

This comes after Will Smith got cancelled by Hollywood as a result of that infamous “Chris Rock slap” at the Oscars 2022 awards ceremony on 28 March in Los Angeles.

Hellomagazine.com has reported that Jada Pinkett Smith and Will Smith are splitting after 25 years together.

The Hollywood couple also made headlines in previous years when several media outlets reported that they took time off amid cheating rumours and open relationships.

A source revealed to OK Magazine in April that the couple hasn’t been on speaking terms since the Oscars slap.

“There have been problems for years, but they’re barely speaking right now.”

Heat Magazine added that Pinkett was cold towards the King Richard actor after the media turned on Smith and that she thinks he overacted.

Jada Pinkett would be entitled to half of Will Smith’s fortune, no less than $350 million if they split and their separation will present a huge legal battle that will divide Smith’s fortune, according to marca.com

This potential division of assets would happen in this way due to the laws of the state of California that so indicate, so Pinkett would add to her net worth, which is currently $50 million, the amount of $175 million.

Hellomagazine.com has reported that Will Smith is still reeling from the Oscars slap backlash as four of his projects — This Joka, The Roku, Fast and Loose, as well as Bad Boys 4 have reportedly been paused since the scandal.

Netflix has halted production on his thriller Fast and Loose, in which he was set to star as a crime boss and Sony has paused development on Bad Boys 4 and Apple TV+ won’t comment on the film Emancipation, which is due for release in 2022.

The Academy also apologised to comedian Chris Rock in a statement for how the situation was handled, writing:

“We want to express our deep gratitude to Mr. Rock for maintaining his composure under extraordinary circumstances.”

“We also want to thank our hosts, nominees, presenters, and winners for their poise and grace during our telecast.”

ALSO READ: Will Smith and Jada headed for one of the most expensive divorces EVER

“I hope this is true Jada has been toxic for Will Smith since the start. She took advantage of him being a standup guy and abused his good nature.”

“The only thing worse than being married to Jada will be going through a divorce with her.”

“If these divorce rumours are true, then this is probably the first divorce we are relieved about.”

“Open marriage and you still divorce..? Kanti what must happen?”

“Will and Jada Smith may be facing what’s being described as “one of the ugliest divorces in showbiz history.”

Will Smith should be in divorce court before he ends up in an asylum for the rest of his days sitting in a corner rocking back & forth babbling ‘parents just don’t understand’ over and over.”