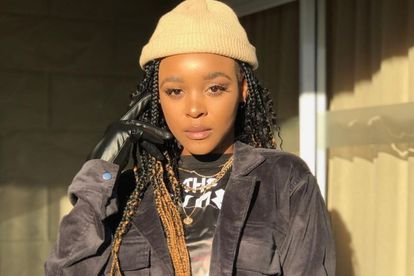 Mbalenhle joined the telenovela as the love interest of Lehasa, played by Cedric Fourie.

“Playing Nothile is a big blessing for me, the character comes at a time in my life where I have grown,” said Mavimbela to Drum.

“Oh, my goodness! Even arriving on the Skeem Saam set was nothing I could have anticipated. I had never shot in the studio before and now I arrived at this big studio set and the cast and crew were all just so amazing,” she continued.

So what do we know about Mbali Mavimebla?

2. BEST KNOWN FOR HER ROLE IN ‘ISIPHO’

Mbali shot to fame for her role as Tandzile in the supernatural drama series Isipo on e.tv.

“I played Tandzile and the show just ended abruptly after 100 episodes and I had smaller roles in other shows too. But Nothile is great because she is a mature young woman and I am keen to play her because she is different from any other character I’ve played of a bubbly girl,” said Mavimbela to Drum.

3. SHE STUDIED TRAVEL AND TOURISM

Although the actress knew dramatic arts for her, she did not get into Durban university of Technology (DUT) to study drama. She therefore, settled for studying Travel and Tourism.

4. SHE STARRED IN ‘DURBAN GEN’

Mbali appeared in the first season of the medical telenovela Durban Gen as Thandi.

“Calvin and McG really are gonna confuse Thandi ????See you next week same time on @durbangen_etv ????,” she wrote alongside a clip she shared to Instagram.

5. SHE IS AN ADVENTURE SEEKER

The actress loves a boost of adrenaline. From her Instagram, she has been horse riding, rock climbing and on the Boost n Bounce jump at Harties Cableway in Gauteng.