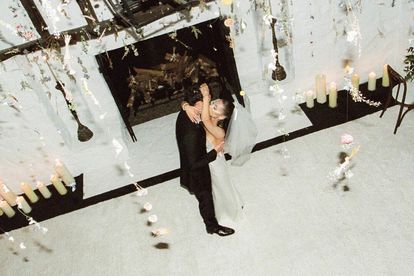 Ariana Grande married her realtor husband Dalton Gomez at an intimate ceremony, attended by less than 20 people, at her California home earlier this month.

On Wednesday, 26 May, the Sweetener singer shared heartfelt images of the lovely ceremony simply captioned “5.15.21 ????.”

The 27-year-old singer wore a custom lily-white silk charmeuse empire waist column gown designed by Vera Wang, while Gomez opted for a Tom Ford suit. According to Vogue, the iconic designer promised Grande she would create her wedding day look at a Met Gala a few years and she kept her word.

The picture of elegance was completed by a shoulder-length bubble-veil with a satin bow and pearl and diamond earrings by Lorraine Schwartz that matched Grande’s engagement ring.

The singer was accompanied down the aisle by both her parents, Joan Grande and Ed Butera at the intimate ceremony attended by family and friends. The singer’s rescue pup, Toulouse was even in on the action.

The happily married couple began dating in January 2020 and spent the early days of the pandemic in isolation at Grande’s home in Montecito, California. Their relationship has been out of the public eye for the most part with only a few romantic photographs of the loved-up pair appearing on Instagram.