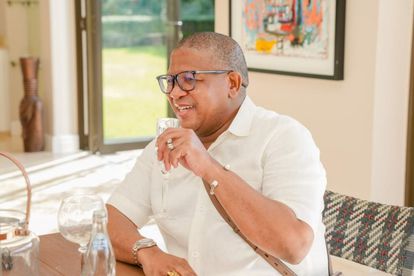 Fikile Mbalula has tweeted about his plans to visit Russia on his birthday.
Image via Twitter
@mbalulafikile

Fikile Mbalula has tweeted about his plans to visit Russia on his birthday.
Image via Twitter
@mbalulafikile

Fikile Mbalula will be turning 51 on Friday 1 April. And to celebrate, the Minister of Transport will be visiting Russia.

But according to Bra Fiks, this is no April Fools’ joke. The flamboyant minister – who hosted a grand 50th birthday party last year – is hoping to travel to the city of Sochi, heralded as a popular holiday destination.

FIKILE MBALULA TRAVELS TO BOTH UKRAINE AND RUSSIA?

Despite Russia being engaged in a full-on land invasion of Ukraine, Fikile Mbalula has expressed no concerns about his travel.

In fact, earlier this month, Fikile shocked South Africans when he tweeted a post which read: “Just landed in Ukraine”.

The tweet left the country confused as to how and why the minister would visit the country under attack by Russian President Vladimir Putin.

Fikile also retweeted a statement by the Russian embassy in South Africa saying it had received “a great number of letters of solidarity from South Africans”.

But Fikile Mbalula remained tight-lipped on the motive for his travels to Ukraine – as he is with his upcoming trip to Russia.

When reporters asked him to elaborate on his stance at a trip to a driving licence testing centre several days later, he clapped back.

“I am not going to comment on that,” Sowetan reported on the minister’s response.

He added: “I did not trivialise anything and I won’t comment on that”.

Fikile Mbalula’s tweet about travelling to Russia did not bode well with his followers.

Like numerous times before, tweeps reminded Fikile to focus on his tasks within the South African transport sector. Others found humour in Fiks’s birthday being on April Fools’ Day.

“We cannot remind you everyday to stop tweeting and fix SA roads. Umdala do your work!”

“Is something wrong with the roads, trains and transportation infrastructure in Russia or are you going for medical treatment?”

“Do you really think sane South Africans really care where you go? We only want you not to come back. And by the way 1st April as a birthday date suits you perfectly”