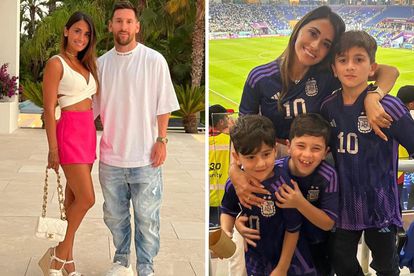 Antonela Roccuzzo – wife of Lionel Messi – has been showing her support for Argentina at the Fifa World Cup in Qatar.
Images via Instagram
@antonelaroccuzzo

Antonela Roccuzzo – wife of Lionel Messi – has been showing her support for Argentina at the Fifa World Cup in Qatar.
Images via Instagram
@antonelaroccuzzo

Behind every great man is his loyal partner. Lionel Messi – representing Argentina in his final World Cup – has praised wife Antonela Roccuzzo for his success.

Lionel Messi – who is starring in his final Fifa World Cup appearance in Qatar – is arguably one of the greatest football players of his generation. But according to the star who hails from Argentina, his wife Antonela Roccuzzo is a big part of his success.

He once said of his life partner in an interview with former club Barcelona: “My wife, Antonela, has lots of great qualities.

“I really admire how she deals with the day-to-day, she is always in a good mood and she approaches problems admirably. She is highly intelligent and well rounded in all aspects of life.”

Although Lionel Messi and Antonela Roccuzzo went public with their romance in 2008 and married in 2017, the couple has been best friends since growing up together in Rosaria, Argentina.

Whilst Messi moved to Spain to further his football career at the age of 12, he made sure to regularly fly to his home country to visit Antonela and her family.

“Wedding of the century”

Their romantic relationship kicked off following a tragedy when Antonella lost one of her closest friends in a car crash in 2007. Messi flew home to console his friend, but things progressed and just a year later, the couple confirmed that they were dating.

In 2017, Messi and Antonella wed in their hometown in what media dubbed the “wedding of the century”. The high-profile nuptials had a star-studded guest list, with many of Messi’s former Barcelona player colleagues and their partners attending.

Whilst Antonella is a successful model, she’s also a prolific businesswoman.

A fitness enthusiast with over 20 million Instagram followers, Antonella also has a bachelor’s degree in humanities and social sciences from the National University of Rosario.

The couple has three sons together – Thiago, Mateo, and Ciro. Antonela and her boys are in Qatar supporting Messi and he represents Argentina in the Fifa World Cup.

Whilst Messi and fellow football player Cristiano Ronaldo have a well-known rivalry, the partners are said to be firm friends.

According to Cristiano, his fiancee Georgina Rodriguez grew up in Argentina, like Antonela.

The women regularly show each other love and support on social media.