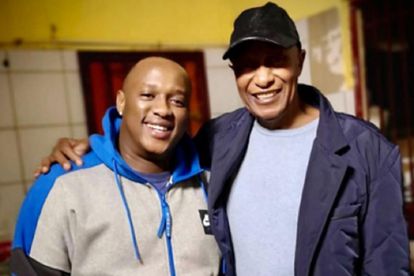 Jub Jub may not have access to his own child with Kelly Khumalo, but that hasn’t stopped him from celebrating Father’s Day with his own dad.

Despite being a public profile, Jub Jub keeps the identities of his family out of the public eye. Which is why it came as a surprise for the Uyajola 9/9 host to share an Instagram post dedicated to his own dad.

He posted alongside several pics of him and the renowned businessman:  “Happy Father’s Day to my rock, pillar, strength, advisor, principal, mafia, boss, black Italian I love you paps”.

According to Sunday World, Jub Jub’s dad Sydney and mother Jackie were embroiled in a bitter divorce battle in 2014. This amid the star’s own legal battles of appealing his murder charges in 2012, which were later overturned as culpable homicide.

Speaking to the publication, Sydney revealed that his split with Jackie was “not amicable”.  “It was very acrimonious”, he said.

Neither Jub Jub nor Kelly Khumalo has made mention of Father’s Day. The former couple has been on bitter terms, with the muso confessing he has yet to meet his son following his release from prison in 2017.

In it, she discusses having to raise Christian on her own, and how he often gets into trouble at school.

She said in one episode: “If there is anything that is taxing, emotionally taxing, it’s the fact that every two to three weeks I must go back to Christian’s school because he’s done this and that. It’s exhausting. I’m tired as a parent.

Kelly Khumalo also mentioned her sadness at her daughter Thingo not knowing her own father, the late Senzo Meyiwa. She said in another episode: “Ever since Thingo’s father passed away, I’ve always been worried about how I’ll break the news that her father is no more. Because I look at this beautiful human being that I have no answers for”.