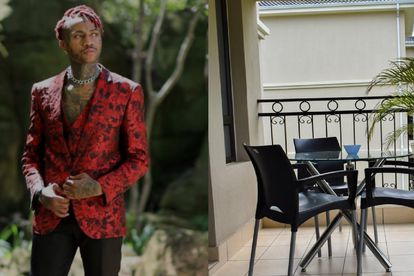 Big Brother Mzansi season three contestant Themba Mabaso’s legion of fans, the Ghost Nation, have taken support to a whole new level. The 30-year-old tattoo artist is now a homeowner, all thanks to his fans who bought him a fully furnished 3-bedroom apartment.

THE #GHOSTNATION COMES THROUGH FOR ITS FAVOURITE HOUSEMATE

Following their failure to help him clinch the Big Brother Mzansi R2 million prize money after losing to Mphowabadimo, Themba’s supporters have been hard at work trying to make his dreams come true.

During his interview with Drum Magazine the week after the show finale, the father-of-two revealed that he had planned to expand his tattoo shop, build a home for his mom and pursue his music career with the prize money.

In the same week, his fans asked him to open a virtual wallet where they would donate money to him with the aim of raising R2 million. So far they have raised R260 000.

When it comes to his music career, Themba seems to be well on his way to becoming a star. Lately, he’s been hanging out with DJ Tira and they have announced recording music together.

Now, the #GhostNation has bought its favourite housemate a fully furnished apartment with modern finishes and an air conditioning system.

AN EMOTIONAL THEMBA THANKS HIS NATION FOR HIS APARTMENT

An emotional Themba took to social media to show off his new home. Sharing a series of videos, and with tears in his eyes, he thanked his fans for his amazing gift.

“So I’ve been crying the whole time but right now I need to show appreciation. Thank you so much, God bless everybody. This is the apartment that Ghost Nation got for me,” he said in one video.

Another video shows the gifting session where the reality TV star can be seen walking into a building as a fan hands him flowers and takes pictures with him. Upon walking into the apartment full of fans, they tell him that it actually now belongs to him.