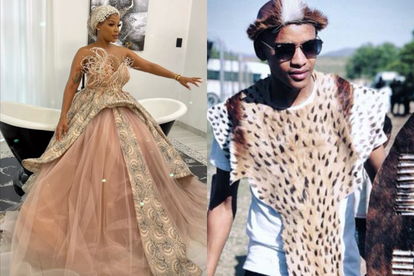 It was an exciting time on Twitter this weekend after Faith Nketsi revealed that she had gotten married to her long-term boyfriend Nzuzo Njilo. While there was no formal announcement, Faith changed her handle to include her man’s surname, and photos and videos from the event were shared online.

Faith and Nzuzo were soon trending on Twitter as many people discussed their “secret wedding”. A number of trolls also started shaming Faith, who shot to fame as the leader of a girl twerk group.

South Africa’s queen of twerk is off the market and happily married to KwaZulu-Natal businessman and multi-millionaire Nzuzo Njilo – or at least that’s what she’s having us believe.

The former pro-twerkers group leader has added Njilo to her name on all her social media channels and was also seen looking all sorts of fabulous at what now appears to be her very secret wedding ceremony.

While it’s all love for the beautiful couple, people on Twitter were not making beautiful comments about the wedding. In fact, a number of trolls were hellbent on ruining Faith’s beautiful day by remarking that she is not wife material.

“It takes a very special type of idiot to make Faith Nketsi a wife.”

“Some guys are brave shame…Who the hell in their right mind would marry Faith Nketsi….boloi”

The fans chirp in

Faith’s many fans were not having it and quickly put the trolls in their place. Many remarked that most of the men who are saying that Faith isn’t “wife material” do not stand a chance with Faith who has built herself a mini-empire.

“It’s the men who say they would never marry Faith Nketsi because she is not wife material that is making me laugh out loud.

Because if you are honest with yourselves, she would not even bat an eyelid in your direction. Shove that “wife material” nonsense up your nether regions.”

Meanwhile, many fans have started speculating that Mrs Njulo may be pregnant because she did not wear one of her usual figure-hugging dresses to the wedding.

Some people even swear that they spotted a bump underneath her gorgeous wedding gown. Only time will tell whether the speculations have any merit to them though…