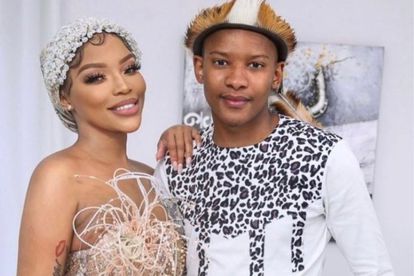 South African reality TV star and social media star Faith Nketsi is as loyal as they come. The 26-year-old who recently said “I do” to KwaZulu-Natal businessman Nzuzo Njilo and then shortly afterward welcomed a baby with him, says that she is sticking with her man – despite the fraud allegations that have been made against him.

Speaking to a local news publication, Nketsi said that she loves her man unconditionally and that no “allegations or things said” about him will make her stop.

Faith Nketsi says she is sticking with her man

Faith Nketsi’s life has changed dramatically over the last few years and she absolutely loves every minute of it.

Not only did she become Mrs Nzuzo Njulo, but she also welcomed a little baby into the world after suffering a miscarriage a few years earlier in a previous relationship.

It appears married life is going well for the star despite the fact that her new husband has been accused of a number of things.

Last year it was reported that Nzuzo Njulo had defrauded business associates out of millions. This year reports cited that the young businessman may be dead broke and heavily in debt.

Taking in the good – and the bad

Faith who has seen all of these reports, says that people have no idea what’s happening in her relationship or her household and she loves it that way.

Speaking to TshisaLive, Faith said that it doesn’t matter what is said about her man, she is sticking with him.

“Whether allegations or things are said, I still love him the exact same way I used to love him and that’s by maintaining our privacy. When such things come out it doesn’t really bother me because at the end of the day, I know what’s going on in my household and I know how things are kept in my household,” she told the publication.

JUST IN: Tom Brady retires – this time for GOOD (VIDEO)