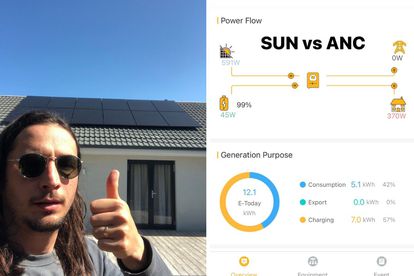 The Kiffness has shared an update on his newly-installed solar energy system after ditching Eskom and load shedding in July.
Image via Twitter
@thekiffness

The Kiffness has shared an update on his newly-installed solar energy system after ditching Eskom and load shedding in July.
Image via Twitter
@thekiffness

Weeks after telling Eskom to take a hike and switching to solar energy, The Kiffness is living a stress-free lifestyle without load shedding, thanks to the sun.

David Scott – known by his stage name The Kiffness – revealed in July that he would be installing a solar energy system. And he has not looked back since.

During July’s bout of load shedding woes, The Kiffness revealed he had forked out a small fortune – around R130 000 – to instal a solar system.

He hoped the off-the-grid system – which requires a backup utilising a generator to fill batteries –  would see the end to his tumultuous relationship with Eskom.

He tweeted at the time: “Paid deposit for our hybrid solar installation. 12 panels & a 5kw inverter.  If all goes to plan, it should be up & running next month. Load shedding will be a thing of the past”.

Fast forward to September and The Kiffness is reaping the rewards of his decision. Sharing an infographic of “the sun vs the ANC”, the Cape Town muso revealed how the system worked.

He tweeted: “Shout out to the sun for governing my household better than @MYANC ever will”

When questioned long long the solar energy lasted, he added: “As long as we don’t use kettles, heaters, stoves, or anything that creates heat, the battery will last a while.

“As you can see our panels are currently generating 591W of energy but we’re only consuming 370W”.

He added that he may invest in another 5kw inverter “in time” to up his energy production.

PUTTING ANC AND ESKOM ON BLAST

Following his energy update, The Kiffness took aim at Eskom and ANC again. This after the country is experiencing Stage 6 rolling blackouts.

He tweeted on Wednesday 21 September: “The worst thing about load shedding is that @MYANC MPs homes don’t get load shedding, but hospitals where electricity is crucial for people in intensive care, do.

“The ANC started this mess. And yet they still put their comfort ahead of innocent, sick people whose lives are at stake”.