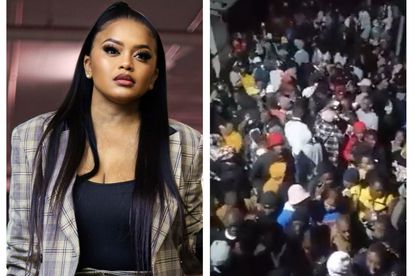 Lerato Kganyago and other SA celebs have reacted to the Enyobeni tavern tragedy that took place on Sunday morning.
Image via Twitter
@leratokganyago

Lerato Kganyago and other SA celebs have reacted to the Enyobeni tavern tragedy that took place on Sunday morning.
Image via Twitter
@leratokganyago

On Sunday, South Africans woke up to the tragic news that 21 children had died at the Enyobeni tavern in East London.

The minors were patrons at the Scenery Park nightclub and were allegedly celebrating the start of the winter holidays.

Pictures of the children’s lifeless bodies flooded social media platforms with speculation rife as to what had transpired.

OWNER: ‘IT WASN’T MY INTENTION FOR THIS TO HAPPEN’

According to police spokesperson Athlenda Mathe, the Scenery Park police station received a call at 04:00 about “lifeless bodies” that were found at the local Enyobeni tavern.

“Upon arrival, police found 17 bodies inside the building. It was later established two more died at a local clinic, one died en route to [the] hospital, and another died in hospital,” she said.

Circumstances surrounding the death of the children remain a mystery. Twelve boys and nine girls have been confirmed dead with the youngest being just 13 years old.

The Enyobeni tavern owner has maintained that he was not present at the premises during the incident.

Siyakhangela Ngevu told eNCA: “I was called in the early hours of the morning by security guards saying that I should come back as there is chaos.

“The place was very chaotic. It was filled with children and young boys…with security guards finding it hard to control the situation. Unfortunately, the numbers were higher than expected”.

Ngevu stated that at one point, pepper spray was sprayed into the unruly crowd. He added: “I am not going to dispute that someone came in and used pepper spray that resulted in people dying. I wasn’t there and it wasn’t me who sprayed the pepper spray

“I sympathise with people who have lost their loved ones. It wasn’t my intention for this to happen  I request that we calm down and let the police do their job and take it from there”.

CELEBS ARE HEARTBROKEN AND OUTRAGED BY ENYOBENI TAVERN TRAGEDY

On social media, some of South Africa’s biggest stars expressed anger and despair at the Enyobeni tavern tragedy.

Lerato Kganyago shared on Instagram: “To the mothers, fathers, sisters, brothers, and friends who have been directly touched by the tragedy, my deepest condolences.

“East London holds a special place in my heart. I am truly heartbroken by what has happened”.

Ntsiki Mazwai questioned why underage children were allowed to enter the Enyobeni tavern.

The outspoken Twitter personality also slammed those she believed were responsible for the deaths of children.

She added: “Selling alcohol to underage kids. Only one entrance to his club. The spraying of the pepper spray or gas to make the kids leave is homicide. Lots of laws were broken last night”.

Others reacted on Twitter to the Enyobeni tavern tragedy.