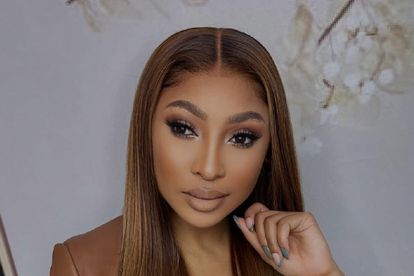 Actress and businesswoman Enhle Mbali Mlotshwa is an inspiration to many women, and rightfully so. The country has seen her winning and losing some battles, especially in the love department.

But one thing’s for sure, the A Safe Bet actress has not given up on finding her soulmate – one she will grow old with. This is evident in a recent Instagram post.

ALSO READ: ‘A Safe Bet’: Enhle Mbali on love quests and her character in new romcom

THIS IS THE KIND OF LOVE ENHLE MBALI WANTS

Taking to her Instagram account this week, the Rockville actress shared a heart-warming video of an old married couple. In the video, the pair (who has been married for 53 years) is seen holding hands as they both fall asleep on the couch.

As if that is not enough to depict the love between this beautiful couple, one cannot also help but notice that they have matching blankets: #couplegoals.

Captioning the video “What I Want” — which was originally posted by @majicallynews — it’s evident that the actress still believes in love and hopes that a love as beautiful as the one depicted comes her way some day.

Watch the video below

The beautiful and talented actress debuted on the entertainment scene in 2005 on the defunct SABC1 drama series Mthunzi.com. It wasn’t until her lead role on Tshisa (another defunct drama series on SABC1) that she became one of Mzansi’s “IT” girls.

With many other TV roles — including Soul City, 4Play: Sex Tips and Broken Bows — she has become a household name. At the same time, she and her estranged husband DJ Black Coffee became “couple goals”.

The two stars shared a love that seemed to be a “happy ever after” relationship and they had two boys together. In 2017, Enhle and Black Coffee cemented their love in a lavish white wedding. This after getting married traditionally in 2011.

However, it all unfortunately came tumbling down as allegations of infidelity and abuse surfaced, leading the couple to split in 2019. Regrettably, their divorce has been a rocky one and one that has been highly publicised.

As more and more information continued to surface about the two ex-lovers, the courts had to intervene in the form of protection orders.

In March 2021, Enhle applied for a protection order against DJ Black Coffee. This came after she had accused the DJ of abusing her at her birthday party in their matrimonial home.

ENHLE CONFIRMS SHE IS DATING AGAIN

Following these events, the actress made a documentary,titled The Voice, which depicts the journey of healing she went through. Speaking to The South African about the The Voice, she explained her decision to document her life.

“So the reason I made that documentary is that women are a lot of the time failed by the justice system. I am a believer that a man is meant to protect a woman but our country is in disarray because men have forgotten what the role of a man is and continue to not only harm the women but to harm women and children, who are not the weakest but need protection in society,” said Enhle.

She further explained in the interview that she is dating again and is open to love.

“So, The Voice was me just saying guys, I’m not going to fight. Whatever the universe hands to me, the universe is handing to me because God is strengthening and teaching me. So I am going to share that I am going on dates, that my heart is opened to love.”