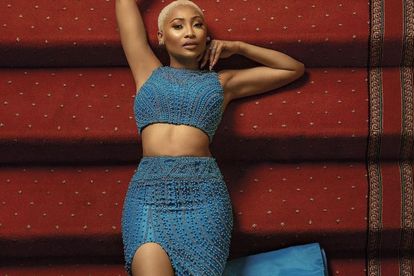 Actress Enhle Mbali Mlotshwa says she is open and honest with her sons about her marriage to their father Nkosinathi Innocent Maphumulo, popularly known as DJ Black Coffee.

Enhle Mbali and DJ Black Coffee were once Mzansi’s “it” couple. However, the marriage began to go downhill with issues of infidelity and children born out of wedlock…followed by a “messy divorce”.

Later in May, the former couple aired their dirty laundry on social media with Enhle Mbali revealing Black Coffee had not paid the electricity bill at their marital home while Black Coffee called her out for lying, saying that he had made R65 000 monthly payments to her since November.

ENHLE MBALI ON FAMILY AND DIVORCE

The Rockville actress is featured on the cover of True Love Magazine for their June/July issue where she opened up about her family and divorce.

Enhle Mbali says she is honest with her two sons — Anesu, 10, and Asante, six — about her marriage with their father because she did not want them to blame themselves for it. She elaborated on how she wants her boys to treat women in the future.

“When you meet a woman you love, you don’t steal her joy and take from who she is. You build each other up and I think they get that because they see me working,” said Enhle Mbali in an interview with True Love Magazine.

Turning down work for the sake of peace

Enhle Mbali also painted a vivid picture of how she had to turn down work in order to maintain peace in her marriage.

“There was a time I could not work. Not because I did not want to work but I was told ‘No, you cannot work on this and that’. It was not a choice I made. That choice was made for me and for the sake of peace, I adhered to that decision,” she continued.

Enhle Mbali is plays Lindi Bogatsu on season two of Mzansi Magic’s Rockville where she continues to blow viewers away with her acting.

ENHLE MBALI: ‘MY MOM IS TRAUMITISED’

Enhle Mbali says that the divorce has been taking a toll on her mom who has to relive her own trauma of being in an abusive relationship. There was an instance of her mother’s ex-husband holding a gun to her head and a young Enhle having to beg him not to shoot.

“My mom is traumatised by what I’m going through,” said Enhle Mbali.

“My challenges are usually harder on my mom than on me. I’ve had to be really understanding of her feelings. She has been through an abusive marriage,” she continued.