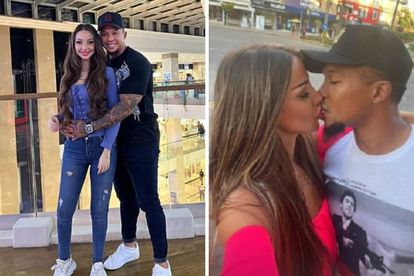 Elton Jantjies continues to post loved-up pics of his wife Iva Ristic, despite her wish to get a divorce.
Images via Instagram
@eltonjantjies

Elton Jantjies continues to post loved-up pics of his wife Iva Ristic, despite her wish to get a divorce.
Images via Instagram
@eltonjantjies

Iva Ristic confirmed this week that she has made up her mind about divorcing Springboks player husband Elton Jantjies following his alleged affair with Zeenat Simjee….but it appears he hasn’t received that memo.

On Monday, the model spouse of the flyhalf told Netwerk24 that their marriage was over. She also claimed that she could only “offer friendship” to her partner of over a decade.

Elton is currently in Turkey (and not Cyprus as previously reported) and is enjoying quality time with his wife and their three children.

ELTON JANTJIES COSIES UP TO WIFE IN TURKEY

While the rest of the Springboks are in the UK as part of their end-of-year tour, Elton Jantjies – who was snubbed from the squad – is in Turkey.

And it seems the athlete is hoping to make amends with his family – particularly his wife – after confessing to having an affair with Zeenat Simjee.

He’s also claimed in a News24 interview that he had “made it my mission to make it up to her for as long as I live”.

Supporting his claims, Elton posted a picture cozying up to Iva, taken during a date together. In the pic, the couple smile for the camera, whilst Elton shows affection towards Iva by placing his arms around her waist.

He captioned the pic: “Living large with my soldier”. Elton’s mother Elma commented under the pic, supporting what appeared to be a happy union. “God’s blessings I love you guys”, she posted.

Earlier this month, Elton posted a picture of him kissing his wife, teasing his followers that his relationship with Iva was more than just a “friendship”.

DIVORCE REMAINS ON THE TABLE

Like Elton, Iva has been posting pictures and clips of each other on their Instagram feed and Stories.

But don’t be fooled by their smiling faces – Iva told News24 that she is going ahead with divorce plans. This, after allegations of an affair between Elton and Zeenat Simjee first surfaced in September.

In an interview with News24, last week Elton claimed he had come clean to his wife about the alleged affair – which Zeenat has repeatedly denied.

In fact, Zeenat’s lawyer Frikkie Erasmus told Netwerk24 that the whole saga was “a case of mistaken identity”. He added that the woman pictured with Elton at a Mbombela guesthouse was not her.

Sharing her plans to separate from Elton, Iva claimed that they were no longer working on their marriage. She added: “Unfortunately I can’t offer Elton anything more than friendship”.

Iva also claimed that she had sent “proof” of the alleged affair to Springboks management two weeks ago – but “no action” had been taken against Zeenat Simjee.

She added: “I don’t know why I still have to fight over this. It’s so cruel and inconsiderate to any Springboks wife. It must not even be a consideration….she must go! It’s not as if there aren’t any other dieticians in South Africa”.

Iva also claimed that Zeenat continued to send Elton messages, following the allegations. Elton has yet to comment on the latest developments.