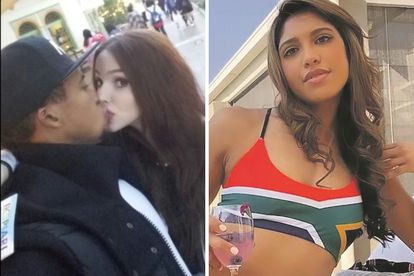 Iva Ristic – the wife of Elton Jantjies – has reportedly sent Springboks coach Rassie Erasmus “proof” of his affair with dietician Zeenat Simjee, in the hopes of getting the latter axed.

The claim was made by Rapport who allege that the national rugby team bosses are considering sending Zeenat home amid their European tour.

This, following player Elton’s confirmation last week to News24 that he did embark on an affair with the Springbok professional, despite her own denial.

Weeks after the affair, Elton has reunited with Iva and their three children at their home in Cyprus.

According to Rapport, Iva has sent “proof” of the affair to Rassie Erasmus – in the form of screenshots of text messages.

Iva claims the texts alleged that Elton’s affair with Zeenat Simjee has been ongoing throughout various team matches.

One of the screenshots includes a reservation for a romantic boat side at the Sydney Harbour – allegedly before the Springboks vs Australia test match on 3 September.

Others show hotel and flight bookings for two. But things get more sensational; the publication claims that in one of the messages, Zeenat tells Elton to “divorce” Iva, whom she describes as a “horrible woman”.

Allegations of an affair between Elton and Zeenat first came to light when the former ran up a high hotel bill in Mbombela, complete with flowers and expensive champagne for his “side chick”.

Witnesses identified the flyhalf and Zeenat together.

And according to Rapport, Rassie was “shocked” at the “evidence” presented.

And on the agenda was the possibility that she may have to return home mid-tour. This, amid the public backlash of the cheating scandal.

A decision has yet to be made public.

Following the news that Iva is on a mission to land Zeenat Simjee in hot water, SA rugby fans shared their thoughts on social media.

And many had little sympathy for Elton Jantjies’s wife, whom they claimed was a “scorned woman”.

@Stefan9: “Personal issues have nothing to do with the director”

@NotFromHereToo: “SARU is the employer, not the parents. Everything happened after hours, surely the employer can’t be responsible for that”

@vivamood1: “So let’s destroy the woman. Whilst we party up a storm in Cyprus with poor defenseless hubby, who was held hostage in this affair”