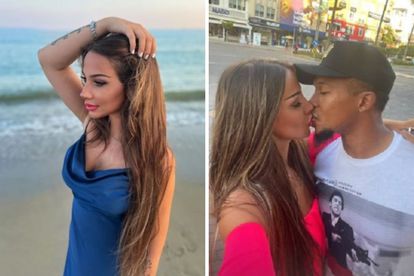 Elton Jantjies’s wife has clapped back at criticism of her move to Cyrus.
Images via Instagram
@ivarisstic/@eltonjantjies

Elton Jantjies’s wife has clapped back at criticism of her move to Cyrus.
Images via Instagram
@ivarisstic/@eltonjantjies

Iva, the wife of Elton Jantjies, has fuelled speculation that a separation is on the cards after she changed her social media handle to reflect her maiden name.

The model also clapped back at critics of her move to Cyprus. This, whilst her husband seeks professional help for a reported “drug addiction” in South Africa.

In August, Elton Jantjies was accused of having an affair with Springbok team dietician Zeenat Simjee. However, both have since denied the allegations.

Elton Jantjies’s wife – who shares three sons with her Springbok player spouse – shared a scathing message to those who condemned her move in an Instagram Story.

Iva and her children touched down in Cyprus over the weekend leaving behind their “home” in Tokyo, Japan. The move comes weeks after Elton Jantjies revealed he was committed to getting his “personal life and career back on track”.

The publication also claimed that Elton had booked himself into the Harmony Clinic rehabilitation centre for an alleged drug addiction.

But Iva’s move has fanned the flames that all is not well within their marriage.

Taking to her Stories, Iva vented of her critics: “Making the headlines again, and again, unbelievable. It’s Cyprus guys, not the end of the world.

“Almost everything you read in the media is an assumption. Don’t fall for it….I’m sure there are more important events happening around the world than me travelling somewhere”

ALSO READ: ‘What about another dietician?’: Elton Jantjies trolled over family pic

Meanwhile, Iva has also fuelled speculation of a split from Elton Jantjies after social media users noticed that she had changed her IG handle to her maiden name “Ristic”

Additionally, Iva had also deleted a link in her bio to an article describing her as Elton Jantjies’s wife.

In September, weeks after allegations of Elton’s affair, Iva clapped back at a statement made by the Springboks, who claim that “no protocols were broken” by his alleged behaviour

She told News24: “This is very concerning for all the Springbok wives as none of us was aware that this behaviour is actually not breaking any rules and it’s taken so lightly…

HAS ELTON JANTJIES REUNITED WITH HIS FAMILY?

Meanwhile, Elton Jantjies has sparked speculation that he may be joining his family in Cyrpus.

Sharing pics of his family on his Instagram feed, he posted the cryptic captions: “We gonna have a blast together”. In another, he added: “Few more hours my Gringos”.

He’s also posted pics of his wife and their children on his Instagram Stories.