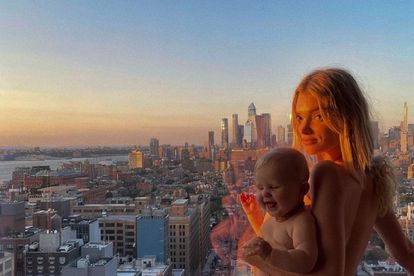 Swedish model Elsa Hosk hit back at critics who thought posing nude with her undressed seven-month-old daughter was child pornography, via an Instagrma story on Wednesday 15 September.

The model, best known for her apperances on the Victoria’s Secret runway, posted a series of nude pictures of herself holding her undressed seven-month-old daughter on Instagram. Elsa Hosk, who has 6.9 million followers is seen looking out the window and laying in bed in New York City.

Elsa Hosk and Tom Daly welcomed their baby girl Tuulikki Joan Daly to the world in February this year.

“Let me tell you about the city where I fell in love with your dad…❤️,” wrote Hosk on Instagram.

FANS AND FOLLOWERS REACT TO PICTURE

Fans and followers of the model showed concern in the comments section of the post.

“Please don’t post naked pic of your child, there are so many sicko and dangerous people 😢,” wrote @babyhomma. The comment received over 5000 likes.

“Why are people posting their babies naked on ig??? Someone explain me pls 🤦🏻‍♀️,” wrote @_eeasy. The comment received over 4000 likes.

“You and your child are going to be all over the dark web now, please think about that,” wrote @sleepiangel.

Another Instagrammer said she reported the picture for the child’s safety.

“Reported this for the baby’s safety and yours. You know you can get in serious trouble for posting child pornography right? I know you’re a new mom but this is like basic knowledge,” wrote @_blueve.

Taking to her Instagram story on Wednesday 15 September, Elsa Hosk shared a lengthy post in response to the backlash she had been receiving. She began by saying that this is a normal thing.

“Wow. Posting a picture where I’m with my baby naked is not child pornography. It’s a normal thing,” wrote Hosk on Instagram.

She went on to explain that she grew up in Sweden where being naked was “normal” and she had been naked in beaches and public.

“Growing up in Sweden I was naked ALL the time, at beaches, at home, in public,…it was so natural to us and we were not taught that our bodies were something you had to hide away in fear of what strangers might think. I think it created a very healthy relationship to nudity and to my own body,” she added.