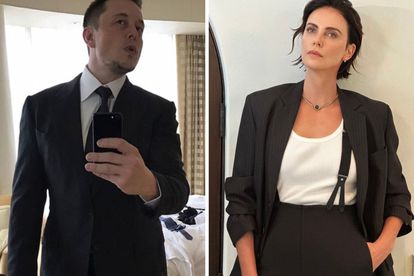 Like Charlize Theron – Elon Musk was born in South Africa. But does he speak Afrikaans too?
Images via Instagram
@elonmusk/@charlizeafrica

Like Charlize Theron – Elon Musk was born in South Africa. But does he speak Afrikaans too?
Images via Instagram
@elonmusk/@charlizeafrica

This week, actress Charlize Theron courted controversy after she claimed that her mother-tongue Afrikaans is a “dying language”. She also suggested that only “44 people” still speak it – but did she include another prominent South African-born star on the list – Elon Musk?

Charlize was born and bred in Benoni, Johannesburg, whilst Elon grew up a stone’s throw away in Pretoria.

Although he is now a US citizen, Elon Musk has been an open book about his South African roots.

The “Chief Twit” was born in Pretoria in 1971 to businessman Errol Musk and former model Maye Musk. He attended Pretoria Boys High school – a prominent English/Afrikaans school in the metropolitan of Pretoria (now Tshwane).

After his parent’s divorce, Elon Musk left SA with his mom and siblings Tosca and Kimbal to emmigrate to Canada. They later moved to the US.

Errol – who still lives in SA – speaks both English and Afrikaans fluently.

But unlike Charlize Theron, Elon Musk was raised in a predominately English-speaking household, although his dad insisted that he is “partly Afrikaans”.

According to Errol, their family’s move to Pretoria – an Afrikaans suburb – was met with great hostility on his end.

Although both his parents have strong Afrikaans roots, Elon was unhappy as he could not form friendships and relationships with Afrikaans people

He said in a video on his YouTube account: “When Elon got to the time of meeting girls in Pretoria, there were no girls to meet, it was impossible to meet an Afrikaans girl. He was considered an Englishman.

“This was very frustrating for him”.

Watch what Errol had to say about Elon Musk’s childhood in the video below.

After trending on social media and courting backlash, particularly amongst South Africans, Charlize Theron made headlines around the world for her comments about Afrikaans.

The comments were made in an interview with the podcast SmartLess.

Chatting to podcast hosts Sean Hayes, Jason Bateman, and Will Arnett, Charlize spoke about learning English when she moved to the US at the age of 19 years old.

Charlize has yet to respond to the controversy.