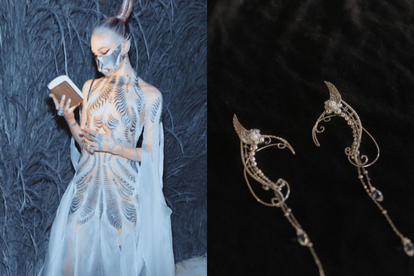 Grimes is auctioning her accessories to donate the money towards Ukrainian war victims. Images via Instagram: @grimes

Grimes is auctioning her accessories to donate the money towards Ukrainian war victims. Images via Instagram: @grimes

US artist Claire Elise Boucher who is well known for her stage name Grimes recently announced that she will be auctioning her iconic Met Gala accessories. According to the announcement which was made on her Instagram page this Monday 16 May, the proceeds of the auction will be donated to struggling Ukrainian families.

Grimes to auction 2021 Met Gala accessories for people in Ukraine

Grimes just announced that she is selling her “Dune”-inspired metal face mask and matching elf ears for a good cause.

According to the singer – who has two children with Tesla and Space X founder Elon Musk – proceeds from the auction will be going to BIPOC (Black, Indigenous, and people of color) families in war-torn Ukraine.

According to her post, the funds will be used to provide food, shelter, and evacuation for those in need. She also explains that the auction is taking place on Artsy on Thursday, May 26, 2022.

“Hey guys – I’m auctioning stuff from my Met gala look last year to raise money to help get BIPOC families out of Ukraine since they’re having trouble exiting at the border.

HVW8 Gallery exhibited the works of 50 distinguished artists who aim to support Emergency Response & BIPOC families (black, indigenous, and people of color) in and out of Ukraine.

Each piece offers a unique interpretation of the theme “resistance.” The work will simultaneously be auctioned online via the Artsy exchange. All proceeds will go to Diaspora Relief and Razom, which will use the funds to provide food, shelter, and evacuation support to those in need.”

PageSix reports that the Chris Habana hard-shell facial covering is valued at $1,200 (around R19k), while the intricate elven ear cuffs by Sofia Pavlova are estimated to be worth $1,500 (around R24k).

Meanwhile, she has received high praises for her efforts in aiding those affected by the war in Ukraine.

ALSO READ: Grimes on life with Elon Musk: ‘At times he lives below the poverty line’