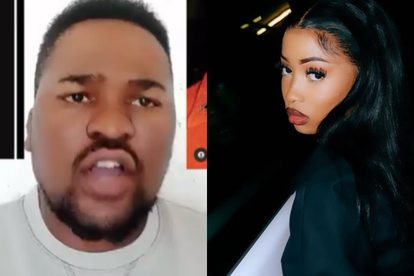 One of South Africa’s most controversial YouTubers – Slik Talk – has struck again. This time the straight-talker aimed his flaming tongue at rising star DJ Uncle Waffles. Slik’s harsh words come after US rapper Drake gave Uncle Waffles a shout-out on Instagram – not once but twice.

According to Slik, Drake just wants to use Waffles – this didn’t sit well with her fans who wasted no time telling Slik where exactly to get off.

Uncle Waffles is definitely winning in terms of exposure and has already performed abroad to crowds who seemingly love what she has to offer.

In fact, the beautiful young DJ has done so well for herself that she has got the attention of one of America’s biggest rappers – Drake. The Toosie Slide rapper recently gave her a shoutout on his Instagram page and before that joined her in her live video.

This has obviously left South Africans across the country super excited for Waffles who appears to have a very bright future indeed.

One person who doesn’t see Drake’s shoutout as a good thing is the ever-so-spicy Slik Talk. The mouthy YouTuber shared another video, this time about Drake and Waffles.

According to him, Drake wants nothing else from Waffles but to use her sexually. He also called her a “talentless DJ and a great performer.”

“Uncle Waffles, you are Drake’s African fantasy, that’s what you are. This man is only looking for one thing and one thing only… Drake is trying to smash, that’s it.”

“He’s not trying to work with Uncle Waffles. You being posted by Drake does not impress me one bit. I listened to your EP, Red Dragon, it was subpar. Uncle Waffles can dance and she’s a great performer, but she’s a talentless DJ.”