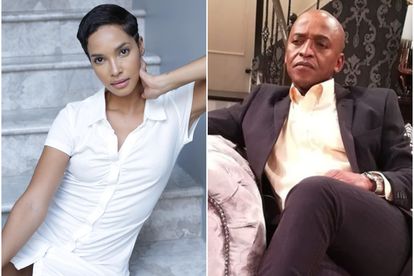 The former Yizo Yizo star even sung his daughter’s praises in an Instagram post – referring to her official name “Zandile”.

But Dumisani’s appreciation post went down in flames after fans reminded the star how he “abandoned” his own daughter, whom he has yet to physically meet. They also accused him of “clout chasing” on her win.

And joining in on the criticism is former Miss South Africa Liesl Laurie, who has compared her own absent father to Dumisani himself.

Shortly after Doja Cat and SZA bagged a Grammy Award for “Best Pop Duo” for their song Kiss Me More, Dumisani took to social media to post the news.

And the actor’s words surely angered fans; without congratulating the star herself, Dumisani drew attention to himself by referring to Doja Cat as “my child”.

He captioned an image of her: “Just wanted to thank everyone who supported my child Zandile. God bless you all”.

Following the backlash, Dumisani deleted his Instagram post altogether. His last post featuring a picture of his daughter was in December 2021 which he captioned: “African princess”.

Doja Cat has previously acknowledged the lack of a relationship between her and her father.

She sad in a Radio One DC interview: “I have never [met him], and he’s on Instagram. And he comments on my pictures sometimes, maybe not anymore, but he did a few months ago. He’s an incredible dancer and great actor, but yeah, I don’t know him very well”.

Taking to the since-deleted post of Doja Cat, she wrote: “This reminds me of my dad when I won Miss SA! What. A. Damn. Mess! Wow!”.

Like Doja Cat, Liesl has also been upfront about her unconventional upbringing.

The 2015 winner revealed that she was raised by her maternal grandmother as her mother was battling substance abuse. She also claimed that her father was “absent” from her and her sister’s lives.

She told Daily Sun: “I sometimes felt embarrassed by my moms drug habits, but she overcame it and I am proud of her”.