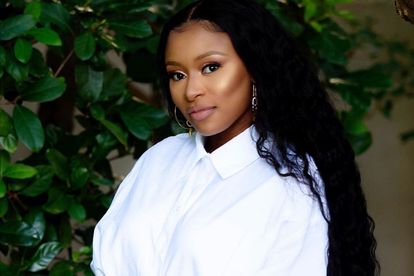 What do you get a celebrity who has it all? For DJ ZInhle, it’s pretty simple – something pretty and preferably shiny…

The DJ and businesswoman didn’t just send her man Murdah Bongz a massive hint about what she wants on the special day – she told him where to get it too!

DJ ZINHLE: WHAT I WANT FOR VALENTINE’S DAY

Taking to Twitter, Zinhle posted exactly what she hopes and expects from her partner on Valentine’s Day

She tweeted: “For Valentines Day, I want my man to get me something from @erabydjzinhle”.

DJ Zinhle was referencing her own accessories business called Era, which sells a wide range of watches, sunglasses and jewellery.

The mom of two has several collections in the Era range, two of which were inspired by her own daughters Kairo and Asante, the latter of whom she shares with Murdah Bongz.

Whilst Zinhle is still waiting on her Valentine’s Day gift, she did hint at a bit of pre V-Day spoils.

Taking to her Instagram Stories, the star showed off an elaborate bouquet of red roses she had received. Whilst she did not mention who it was from, many have guessed that her baby daddy was behind it.

DJ Zinhle also posted a picture of her bae on her Instagram feed with a heart emoji.

ALSO READ: ‘So idiotic’: DJ Zinhle claps back after being trolled for two ‘baby daddies’