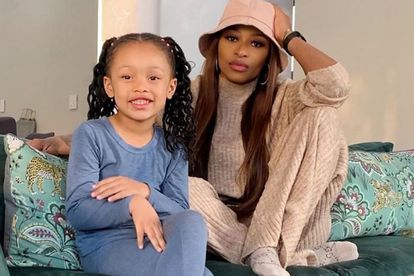 DJ and businesswoman Ntombezinhle Jiyane, popularly known by her stage name DJ Zinhle and her first-born Kairo Forbes bonded over a spa day on Tuesday 19 October.

DJ ZINHLE AND KAIRO UNWIND AT THE SPA

While juggling a new-born baby, DJ gigs and running multiple businesses, DJ Zinhle took some time off to spend the day with Kairo Forbes.

Six-year-old Kairo, who has a million Instagram followers, is DJ Zinhle’s firstborn. The businesswoman had Kairo with her ex-boyfriend, rapper Kiernan Jarryd Forbes, popularly known as AKA in 2015.

The pair split due to rumours of AKA cheating with media personality Bonang Matheba. Since then, the DJ gave love another shot with Black Motion’s Murdah Bongz. The pair have reportedly been together since June 2020. On 8 September, they welcomed their first child together, Asante Mohosana.

“Because any day is a good day to take your mom to the Spa, for a ‘Mom and Me’ pamper session right? ????@lifedayspafourways • @lifedayspakids • @lifedaybaby,” wrote Kairo Forbes on Instagram. Her account is run by AKA’s mom – Lynn “Glammy” Forbes.

ALSO READ: Here’s why DJ Zinhle HAD to tell Kairo Forbes about her pregnancy last

WHERE DOES AKA AND DJ ZINHLE STAND?

Through the Umlilo hitmaker’s reality show DJ Zinhle: Unexpected she opened up her notoriously private life to her fans. Over the last five episodes she revealed several things about her co-parenting relationship with AKA.

Here’s what we know:

The reality show recently received some criticism on Twitter as Tweeps believed the entire storyline was based on telling someone about the pregnancy.

ALSO READ: The ‘Unexpected’: DJ Zinhle wants AKA and Murdah Bongz to get along!