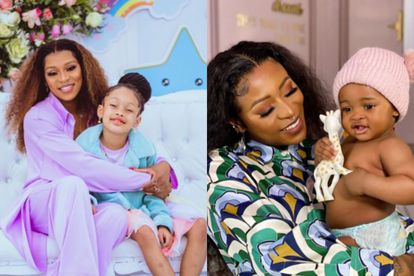 On the latest episode of DJ Zinhle: The Unexpected which aired on BET Africa on 3 September, the businesswoman revealed that she felt as if she was robbing her kids of time with her and needed a time out from work.

DJ ZINHLE FEELS SHE’S ‘ROBBING’ KIDS OFF TIME WITH HER

South African DJ Ntombezinhle Jiyane, popularly known as DJ Zinhle revealed that she needed time out from work to be there for her kids. She has two children – seven-year-old Kairo Forbes with rapper AKA and 11-month-old Asante Mohosana with musician Murdah Bongz.

“I feel so bad that I can’t be there for my child, because I don’t want her to feel like I’m not there for her, like that makes me feels really bad. It’s been a crazy few weeks. I don’t know what’s happening after this weekend, but I need time with my kids,” she said.

She went on to say that she felt like she was robbing her kids of their mother.

“I’m just feeling a little overwhelmed and I feel like we haven’t stopped and I know that I’m doing this for the kids, but I’m starting to feel like I’m robbing them of time with their mother,” she continued.

MURDAH BONGZ ON KAIRO: ‘YOUR CHILD IS VERY DEMANDING’

This comes after she and Murdah Bongz claimed Kairo became more demanding after Asante was born on a previous episode of the show.

Murdah Bongz: “Because you know your child is very demanding”.

DJ Zinhle: “Kairo is so demanding, babe and she knows what she is doing”.

DJ Zinhle explained that Kairo has been demanding a lot more attention now and she’s turned into a baby.

“Kairo is demanding a lot of attention and time from me,” she said.

She went on to say that Kairo as turned into a “brand new baby” since Asante was born.

“Ever since the baby came. Kairo has been serving me baby! She has become a brand new baby,” she continued.