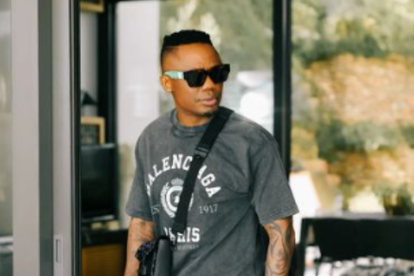 Aside MaMkhize, DJ Tira has arrived. The South African musician recently showed off his flashy side after arriving at a gig wearing a man purse with a pretty hefty price tag. Tira is one of many local personalities who evidently harbor a deep love for expensive designer labels and this hasn’t gone unnoticed by social media users who haven’t stopped gushing over the artist’s expensive taste.

Many of them could not believe that he would fork out that much on a bag while others simply dream of the day they would be able to afford such luxuries.

If there is one thing about South African media personalities, it’s that they love to flaunt it if they got it.

While their spending habits are often frowned upon by people who believe the money could be better spent – this does not stop them from forking out thousands if not millions on designer brands.

Some of the favourites here in South Africa include Louis Vuitton, Gucci, and Balenciaga.

DJ Tira, a big LV lover, recently showed out with LV bag worth a whopping R50 000.

Taking to Instagram, Tira shared a snap of his outfit which he wore especially for a performance at Pretoria’s upmarket club Brooklyn Lifestyle.

ALSO READ: ‘Her shades are my salary’: SA reacts to MaMkhize’s R100k outfit

Just a few months ago, Tira was trolled for rocking his lavish robe out in public.

“We also pray for DJ Tira to stop wearing a morning robe in public. It doesn’t matter whether it is Versace or Gucci. He is making us a laughingstock,” read a comment about the famous red robe in a Sunday World article.

Meanwhile, Tira and his wife Gugu Kathi did get many thumbs up for their look at the SAMAs which took place last Saturday.