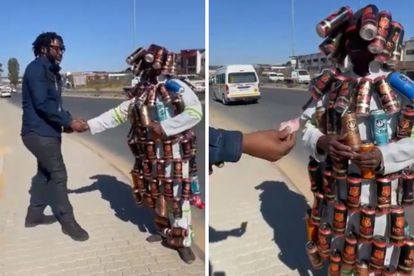 DJ Sbu has been trolled on social media after he gifted a superfan just R50.
Image via Twitter

DJ Sbu has been trolled on social media after he gifted a superfan just R50.
Image via Twitter

DJ Sbu may have met his biggest fan in Mzansi, but his reception towards the man has been widely ridiculed on social media.

The media personality, businessman, and motivational speaker came face-to-face with a man who claimed to be the star’s most loyal supporter.

In a video that went viral on Twitter, DJ Sbu is seen on the side of an unknown road chatting to a man who claims to be his “biggest fan”.

And by the looks of it, the unidentified man put his money where his mouth is. Dressed in a unique garment fashioned out of Mofaya energy drinks, the man seemingly made a living out of entertaining road users.

“I like Mofaya, I drink it when I have money”, the humble man told his hero.

But DJ Sbu – who is a self-confessed millionaire – had social media users reeling after he gifted the man just R50. “Just because you drink Mofaya, this is from me to you. Thank you brother”, he said enthusiastically as he handed the man the cash.

DJ Sbu has made headlines of late over his care-free appearance of long dreadlocks and a growing beard. Social media users have even claimed that he is “cursed” by singer Zahara’s ancestors after she accused him of exploiting her at his former music label TS Records.

But whilst R50 may sound like a generous tip to some, many felt the DJ was being “cheap” with his cash donation.

@ChrisExcel102: “DJ Sbu is almost a billionaire but he doesn’t play with money”

@inkingayodwa: “DJ Sbu is unfair, just R50 only? No. This guy left Zimbabwe and swam across the crocodile-infested Limpopo River to come and wear his energy drink cans. All flavours. R50? No”

@drfmkhonto: “I’m sorry to say it but after seeing this, now I believe Zahara”

@kingfreshwalter: “DJ Sbu should’ve appreciated this man’s creativity around his Mofaya brand, especially since he knew he was gonna use him to promote himself and the brand”

These niggas jumped out the car, turn on their phone cameras to capture Sibu giving this dude R50. I am blown away. They also posted it. pic.twitter.com/p3syu7gREa

R50 from a millionaire pic.twitter.com/XLErAHu2be