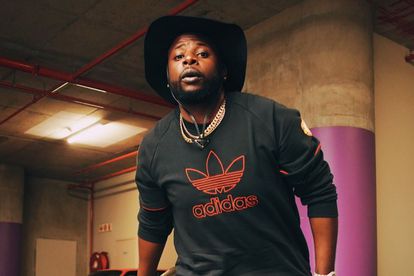 DJ Maphorisa clapped back at a music promoter who claimed to have originally developed the ‘Scorpion Kings Live’ concept. Image via Twitter @DjMaphorisa

DJ Maphorisa clapped back at a music promoter who claimed to have originally developed the ‘Scorpion Kings Live’ concept. Image via Twitter @DjMaphorisa

Kabza De Small and DJ Maphorisa are gearing up for their highly-anticipated Scorpion Kings Live show at the SunBet Arena in Pretoria on Friday 22 July and they will be sharing the stage with the likes of Ami Faku, Msaki and more.

As the event draws closer, a music promoter took to Twitter claiming that he owns the intellectual property of the show. The tweep went as far as threatening DJ Maphorisa but the amapiano star seems totally unfazed…

A music promoter, who goes by the Twitter handle @francwear, took to Twitter to claim that originally developed the Scorpion Kings Live concept. In a tweet on Wednesday 20 July, the promoter claimed that he pitched the idea in December 2019 after the success of One Night With Sjava.

“The artists in mention had no idea of this, as I knew that they could cheat me out of the deal,” he wrote.

“After I signed the deal with the venue, I approached DJ Maphorisa to set a meeting with Kabza up. We met at Kabza’s house in Midrand. The meeting was held in Kabza’s bedroom studio.”

The promoter then requested to meet DJ Maphorisa to resolve the issue, but it seems the request fell on deaf ears. His tweets also sparked a response from DJ Maphorisa and the amapiano star did not seem to be bothered.

“I bet this guy doesn’t have money to pay lawyers. What a lame,” wrote the producer and DJ.

The promoter then insulted Maphorisa calling him a “snaai (criminal)” and a thief.

SCORPION KINGS LIVE WILL GO ON!

The Scorpion Kings Live concert was initially set to take place in April 2020 but was postponed due to the COVID-19 pandemic. More than two years later, fans who bought their tickets back then will be treated to a spectacular show at the SunBet Arena in Pretoria.