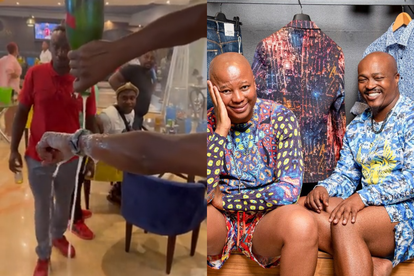 It is a well-known fact that those with money love making sure that other people know it. Over the last few months, South African celebrities have been working overtime to make sure that we all know that they are balling. First, it was DJ Maphorisa, then it was AKA and his newly unveiled girlfriend Nadia Nakai and now it’s DJ Mahoota.

This festive season seemed to be the perfect time for South African celebrities to show off just how much money they have in their bank accounts. In December last year, we saw DJ Maphorisa crushing his weed on a $100 bill in a nightclub.

Shortly after that, rapper AKA took to his Instagram Stories to share a video clip of himself pouring a pricey bottle of champagne on his and Nadia Nakai’s expensive Rolex watches.

ALSO READ: It’s official: AKA and Nadia are an item, we’ve got clips to prove it [watch]

It seems he left another local celebrity inspired by his actions and let’s just say more champagne was being wasted.

In a clip that has gone viral online, 59-year-old Mahoota appears to be at a lifestyle lounge surrounded by onlookers when he starts to pour an entire bottle of champagne on his watch.

Fans are not impressed

These kinds of videos do not seem to be sitting well with South African social media users who have slammed Mahoota and other celebs for flaunting their wealth in the faces of people who barely have money to get by every day.

Many also pointed out that Mahoota is old enough to understand that it is not okay to waste money for the entertainment of others.

“Sometimes as celebrities, we need to outgrow some trends, I hope they gave him a mop to clean the floor after this.”

“He is wasting what he should be saving towards his pension. Hi retirement is not that far away”

ALSO READ: Only in South Ahhh: Maphorisa uses a $100 bill to crush his weed [watch]