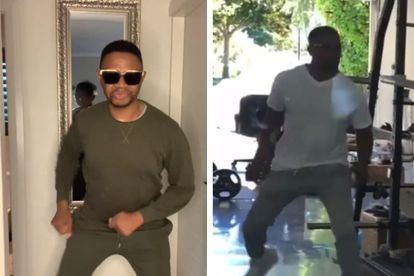 DJ Bongz and the rest of South Africa is waiting patiently for the Hollywood actor Jamie Foxx to pick a time and place for the two celeb’s highly-anticipated dance battle.

As of June 2021, the actor took to Instagram, in which Foxx did the Stanky Leg dance – a dance that closely resembles Bongz’s signature move. It wasn’t long after the video was posted when DJ Bongz called it what it is; his signature Gwara Gwara dance.

According to ZAlebs, Bongz was impressed and even applauded the actor before he schooled him on who created the dance, “I started doing the Gwara Gwara dance in 2016…the time I was shooting my music video [for] Ofana Nawe just Google it…you will see,” he said.

Foxx suggested that the two battle it out to see who does it better.

DJ Bongz did not waste any time to respond saying he is already warming up and is waiting for the time and place.

“Just a warm-up for our dance battle.. I’ll wait for the place and time for the battle,” he captioned his video.

Back in 2018, DJ Bongz was weighing up his legal options after his popular dance move was used by a host of American musicians‚ including Rihanna and Childish Gambino‚ at live shows and in music videos.

Mzansi erupted in applause when Childish Gambino’s This Is America music video premiered and showed the muso busting a young Gwara Gwara. It came just months after Rihanna did the dance during a Grammy Awards performance. According to Sowetan Live, this made DJ Bongz take notes.

At the time, copyright lawyer Graeme Gilfillan disputed Bongz claim that it was possible to trademark a dance move.