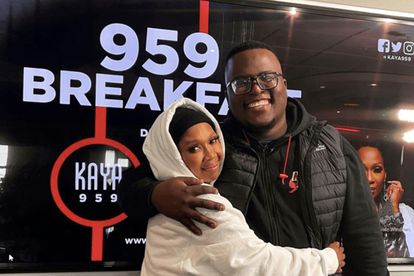 With Dineo Ranaka trending on Twitter for all the wrong reasons – again – Kaya FM has decided to set the record straight on social media commentary surrounding her show with co-host Sol Phenduka.

The radio station responded to rumours that Dineo is “bullying” Sol on their weekday breakfast show.

Defending Dineo against Twitter users who claim she is trying to “outshine” Sol, MD Sibondile Mtyali responded in a press statement.  Explaining their roles, he said: “The structure of 959 Breakfast is that Dineo Ranaka is the main anchor and Sol Phenduka is the co-host and traffic reporter.

“We are aware that a female lead anchor on a breakfast show is unusual in the SA radio landscape, but we have full confidence in both Dineo and Sol’s talent and their ability to navigate the dynamics of the show.”

Kaya FM’s stance puts to bed that Dineo Ranaka and Sol Phenduka are “50/50” partners in the show.

DID SOL TAKE A SHADY SWIPE AT CO-HOST?

Meanwhile, tweeps are amused after they believe Sol Phenduka threw subtle shade at Dineo Ranaka on their Wednesday morning show.

The duo was chatting about “toxic baby mamas”, with Sol lamenting women who create unnecessary drama with their baby daddies.

And tweeps thought Sol’s words was a slap in the face of Dineo Ranaka, who is infamously known for her having three children with three different men.

“Sol Phenduka bringing up the issue toxic baby mamas on Kaya Fm right next to Dineo Ranaka. Sol is wild”

“Not Sol Phenduka bringing the issue of baby mama drama and not allowing baby daddies to see their kids. Remember he is saying all those things while Dineo is sitting next to him on Kaya FM”

“LOL. On the day Sol is given an opportunity to co-host, now he wants to talk about toxic baby mamas. Dineo must be feeling attacked today”

Not Sol Phenduka bringing the issue of baby mamas with lot of drama and not allowing baby daddies to see their kids and remember he is saying all those things while Dineo is sitting next to him on Kaya Fm ???????????????????????????? pic.twitter.com/iIos3K1Kda