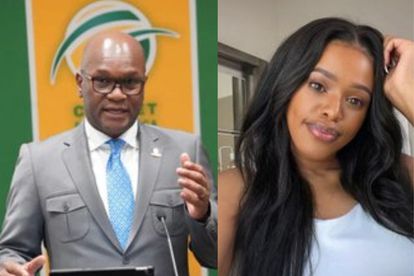 Mthethwa has revealed that the actress directly asked him for R1 million scholarship to study abroad and has no idea how Baleka Mbete is involved.

Also read: ‘The maths is not adding up’: Mmusi Maimane questions Natasha’s ‘story’

“I asked Mam’ Baleka (Mbete) and was like, ‘Mama, I need to go back to school. I’ve been accepted.”

“I don’t know what I’m going to do, can I have funds? Please arrange something for me.”

“She managed to speak to (the department) Arts and Culture and they were able to help me.”

The actress then changed her statement and said she received R350 000 not R1 million.

NATHI MTHETHWA: ‘SHE DIRECTLY ASKED ME’

He was responding to a written parliamentary question from EFF’s MP Khanya Ceza according to an IOL article.

The minister said the actress needed funding from the government to pursue her studies at the New York Film Academy in 2017.

He also said that his department was not aware of the role played by Baleka Mbete in securing the funding for the actress.

”What we know is that Ms Thahane made a request for financial support towards her studies at the New York Film Academy directly to me as the minister.”

“This request is similar to many others that my office and the department constantly receive from members of the public.”

“The public does this possibly because I am the political head of the department.”

Mthethwa reportedly said the funds were for Thahane’s tuition fees at the New York Film Academy.

The terms of the contract with the department stipulated that she must complete her studies.

BALEKA MBETE: ‘DID SHE INFLUENCE THE FUNDING’?

The EFF MP Khanya Ceza wanted to know the extent to which Baleka Mbete influenced the funding for Natasha Thahane.

Ceza reportedly also wanted to know the terms and conditions of the scholarship, and who in the department had approved the windfall.

This is after the actress told MacG that she went to Mbete and told her she needed to go study abroad.

Thahane said Baleka Mbete managed to speak to the arts and culture department.