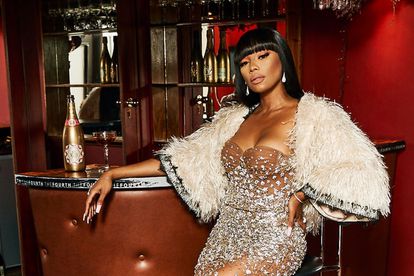 Davin Phillips has responded to what he claims are “false allegations” made by Bonang Matheba on Twitter, who accused him of “stealing” company House of BNG from her

The media personality’s former manager issued a statement exclusively to The South African.

On Thursday, Bonang tweeted up a storm of shocking allegations against her former management company Celebrity Services Africa (CSA), and in particular taking aim at Davin Phillips.

In it, she accused David Phillips of:

In a statement, Davin Phillips claimed Bonang’s allegations were “false”. He also stated that the matter is currently being handled with by their separate legal teams.

He said: “These rants and raves by Ms. Matheba are very unfortunate and tarnish her own dignity and reputation. They are also another attempt by Ms. Matheba to distort and manipulate facts. To be clear, Ms. Matheba joined CSA in 2017 and the House of BNG was launched in 2019.

“Ms. Matheba is currently in breach of multiple contracts with various clients. The matter is currently with our lawyers and her breaches of contract will be decided upon by an arbitrator.’

Davin insisted Bonang “made millions of Rands of profit out of The House of BNG”, whilst “while CSA is still at a loss and in the red after having invested millions in this venture to make it a success”.

He also claims CSA invested in the House of BNG, and has been “significantly instrumental in developing and creating the brand, from the actual naming convention to the route to market, packaging, innovation, the distribution strategy creation of the brand CI and the securing of all event partnerships”.

He said: “The agreement was terminated by iHeart due to Ms. Matheba refusing to comply with her obligations, thus being in breach of her agreement”.

The South African reached out to Bonang Matheba for comment. She did not respond at the time of publishing.

THE BEEF BETWEEN BONANG AND CSA EXPLAINED

Bonang Matheba and Davin Phillips’s relationship dates back to 2017 when the latter signed the star to his agency. In 2017, Davin Phillips also registered the company Vino Ventures which went on to acquire the production rights of House of BNG products.

According to CSA, they were tasked with representing her “entertainment, fashion, entrepreneurship and philanthropy” endeavors.

In 2019, Bonang founded House of BNG with a star-studded launch and positive reception from South African consumers.

Fast forward to 2021 when news of House of BNG ownership came to light.

According to News24, CSA allegedly negotiated directly with Vino Ventures and split the partnership between them cutting Bonang out as a shareholder. CSA further claimed Bonang was aware that any intellectual property, trademark, or copyright developed by them remains their property including House of BNG.

The company claimed that the star was entitled to royalties of BNG sales and requested that she “relinquish control”  of the company as she was in “in breach of multiple contracts”.