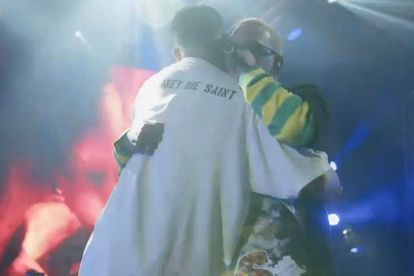 AKA and Da L.E.S embrace after burying their beef at Cotton Fest 2022.
Image via Twitter
@akaworldwide

AKA and Da L.E.S embrace after burying their beef at Cotton Fest 2022.
Image via Twitter
@akaworldwide

Hours after Cassper Nyovest tweeted that his Cotton Fest gig was meant to publicly reconcile him to Riky Ricky, his nemesis AKA also adopted the same attitude – but not with him though.

AKA performed on Sunday night in Newton, officially ending his beef with former friend Da L.E.S. Following Riky Rick’s tragic death in February, Cass revealed that it was the late rapper’s dream for them to show Cotton Fest fans that they had put their beef behind them.

Like AKA and DA L.E.S, Cassper Nyovest and close friend Riky fell out in recent times.

According to insiders, Da L.E.S cut ties with AKA after the latter was reportedly linked to his baby mama Aurea Alexander.

In 2020, rumours of a rift were intensified after Da L.E.S released his single Gucci Snakes, which boasted the lyrics: “N***as try to bite your soul just to take your place. Try to f*** your baby mama to see how it tastes”.

And then there was that MacG episode when the controversial podcaster read an anonymous letter containing allegations of a fling between AKA and Aurea.

But in 2021 appearance on Lasizwe’s YouTube show Drink or Tell The Truth, Da L. E.S claims the song was never about his ex-bestie.

He told Lasizwe: “I am glad you asked me this question. No.1 that track was never about AKA and that’s on period. No.2 don’t believe everything that people say and No.3 I love my family with all my heart so I just decided to choose a path of family and I got a new kid on the way.

Da Les also revealed why he distanced himself away from AKA on BET’s Behind The Story in 2021.

He said: “People who know me know I’m a non-confrontational guy, you know what I’m saying? If I don’t really get with your energy anymore I have to protect my energy first. So that’s where the relationship is right now. It’s putting my energy first, self-preservation first and I just keep it moving. All that ‘he said, she said, I’m not with all of that,” he said.

COTTON FEST FANS: ‘THIS WAS SO BEAUTIFUL’

On Sunday night, AKA brought Da Les out as part of his Cotton Fest act.

The friends – who go back to Tropika Island of Treasure season five days in 2013 – performed their hit songs Real Stuff and All Eyes on Me.

AKA posted a clip of the performance on both Instagram and Twitter, and fans had a lot to say about it.

@tshepza_mbhele: “AKA bringing Da Les on Stage to show that they squashed their beef after so many years is iconic. Ricky would be so proud”

@BKLYNs_Pop: “AKA and Da LES this is beautiful. How I wish this is A-Reece and Nasty…I just would love to see them share a stage”

@BilliatTazzy: “That AKA AND DA LES COTTON FESTMOMENT HAD ME CUTTING ONIONS”