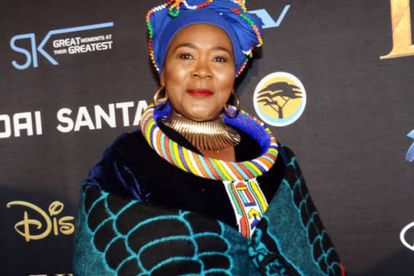 It seems actress Connie Chiume who plays the role of MamSonto on Gomora will temporarily exit the show to start shooting Marvel’s Black Panther 2.

The actress just landed in the United States and posted a since deleted picture of herself in Atlanta on her Instagram account this weekend.

ALSO READ: ‘Black Panther’ sequel will be ’emotional and tremendous’

The director of Black Panther Ryan Coogler stated that everyone from the original blockbuster is returning except Chadwick Boseman who passed away in August last year.

Coogler who also wrote the original Black Panther and the sequel Black Panther: Wakanda Forever told Harpers Bazaar that the sequel will honor Chadwick Boseman’s legacy and his portrayal of T’Challa.

He also stated that Marvel Studios will not recast the character, but will explore the world of Wakanda and the rich characters introduced in the first film.

Actor Atandwa Kani who played T’Challa’s younger father on the film has rubbished claims that he will replace Chadwick Boseman’s character.

The South African actor cleared the rumours on his social media account this morning.

The rumours of Atandwa Kani replacing the late actor began last year after Chadwick Boseman passed away from a lengthy cancer battle.

Chiume hasn’t appeared on Gomora since the death of Siya Xaba’s character Langa.

Her on-screen family mentioned that she’s in Qwa-Qwa recuperating.

The teasers for August suggest that MamSonto will come back briefly.

We are going to see her having disagreements with her protégée Mazet (Siphesihle Ndaba) who wants to return to her old thuggish life.

MamSonto will get shot in August and fall into a coma.

The actress has also starred in Beyoncé’s Black is King, and Blessers besides being a part of the record-breaking Black Panther.

She also acted in the now canned soapie Rhythm City for over a decade as Mamokete before joining Gomora.

Chiume is also known for her roles in Zone 14 as Stella Moloi, Yizo-Yizo as Mrs. Ralentswe, Home Affairs as Mrs. Ntshinga and so many more…