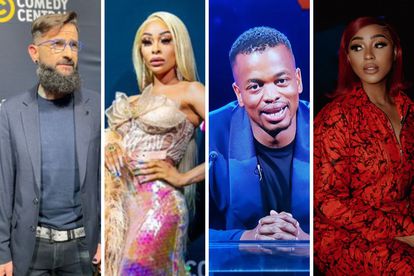 ‘The Roast of Khanyi Mbau’ starred some of South Africa’s biggest stars like John Vlismas, Mpho Popps and Nadia Nakai.
Image via Twitter

‘The Roast of Khanyi Mbau’ starred some of South Africa’s biggest stars like John Vlismas, Mpho Popps and Nadia Nakai.
Image via Twitter

The Roast of Khanyi Mbau has to be one of the most entertaining yet we’ve seen on Comedy Central, and it’s all down to the witty quips from the star-studded panel.

But whilst Khanyi – the first black woman to ever be roasted – was mediocre when it came to her delivery, her celebrity colleagues did not disappoint.

Here are some of the memorable moments from the show…

HIGHLIGHTS FROM THE KHANYI MBAU ROAST

Mpho Popps had viewers – and the panel – splitting their sides, and cringing with embarrassment with his below-the-belt jokes.

Forget Khanyi Mbau, Nadia Nakai, and SelBeyonce were undoubtedly the targets of cruel jibs by panelists.

Whilst Nadia was shown flames over her “body count” and lack of career, SelBeyonce was dragged over her appearance and transition.

Veteran comedian John Vlismas made his comedy return after years of flying under the radar.

But the outspoken star proved that “old is not cold” and came out guns blazing with his racist, sexist, fatphobic, and homophobic jokes.

Many celebs in the crowd showed their support for Khanyi Mbau. They included the likes of Lasizwe, Mohale, DJ Zinhle, the Naked DJ, Linda Mtoba, and many more.

But it was DJ Zinhle’s less-than-impressed reaction to a joke about Nadia and AKA’s sex life that was super awkward and telling of their relationship!

Celeste Ntuli had the audience screaming with her shady swipes at slay queens like Nadia Nakai and Khanyi Mbau.

Whilst we had celebs throwing shade at each other on stage, several others caught stray bullets. They included the likes of Rasta, SK Khoza, Gogo Maweni, and Andile Mpisane…

ALSO READ: ‘I fear nobody’: Khanyi Mbau on being Africa’s first female roastee

Poor Tbo Touch was roasted over his ever-changing accents, his non-relationships with US celebs, and that Soweto TV saga, in which he’s accused of exploiting many staff.