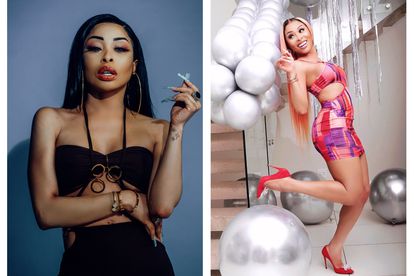 The Comedy Central Roast of Khanyi Mbau has been announced – and has been pitted to be one of the best yet.

The DStv channel announced the news in a statement on Tuesday 14 June. Previous roastees have included Afrikaans singer Steve Hofmeyr and rapper AKA.

KHANYI MBAU: THE FIRST SA FEMALE TO BE ROASTED

Comedy Central revealed that the official taping of the Khanyi Mbau roast would take place in July. The feature would then premiere on DStv Channel 122 and Showmax in August.

Khanyi Mbau said in a statement of the roast: “Who else but me? The first African female to be roasted by Comedy Central was only ever going to be me, even your favs could NEVER.

“You’ve said what you said, now say it to my face.”

Comedy Central revealed that panellists and the roastmaster would be announced in the coming weeks.

FIVE CONTROVERSIES FROM THE CELEB

As with previous roastees, Khanyi Mbau’s colourful life has given fellow comedians plenty of material to work with.

Here are five areas likely to be roasted from the socialite’s past.

Skin lightening: Khanyi Mbau’s love of skin bleaching has had many tongues wagging over the years.

Relationship: Her romance with Zim businessman Kudzai Mushonga – who has previously been accused of fraud and drug dealing according to Sunday World – has also come under the spotlight. There’s also that incident from their 2021 trip to Dubai

Gold-digger lifestyle: Khanyi Mbau’s love of all things flashy and fabulous as well as her relationships with wealthy men have seen her being labelled a “gold-digger”

Motherhood: The star recently came under fire after she revealed her unconventional parenting style to her 15-year-old daughter Khanukhani.

The Wife season two: Khanyi Mbau’s role as ex-con Zandile in the popular Showmax series has garnered much social media attention. Of course, her explicit sex scene with lead character Nkosana Zulu has also had viewers hot under the collar.