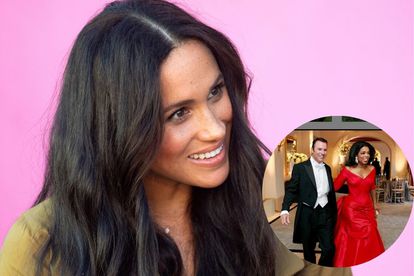 According to Metro, Colin Cowie was reportedly recommended by the TV host after her explosive interview with the Duke and Duchess of Sussex earlier this year.

Cowie is well-known in Hollywood and has catered for Tom Cruise and Kim Kardashian among many more celebrities. He was born in Zambia and raised in South Africa, and is an “avid supporter of several charities focused on aiding children’s health and education including Infinite Family, The Phelophepa Train of Hope, Lalela Project and Ubuntu Education Fund”. Last year, he got married in spectacular fashion at Cape Town’s Boschendal Vineyard.

Now, new reports suggest that Meghan’s 40th on Wednesday is set to be a low-key affair organised by the famous party planner.

“Meghan wants a small gathering. About 65 people are invited, her closest friends and family,” a source told The Mirror. “Colin was recommended to her by Oprah who always puts on fabulous parties.”

The party will reportedly be held on the grounds of Meghan’s California mansion, in line with COVID-19 rules after the state eased most of its lockdown restrictions seven weeks ago. It’s believed Prince Harry has ordered a cake from Posies & Sugar, a bakery in nearby Santa Barbara that creates custom treats for weddings and big celebrations.

Guests will reportedly dine out on “grazing tables” made up of locally sourced food and wine.

The dialled down affair should be a marked contrast to Meghan’s lavish baby shower in 2019.

Meghan reportedly celebrated the impending arrival of her first child Archie at New York’s five-star Mark Hotel, where some rooms cost as much as £57 000 (R822 366,93) per night.

Colin Cowie was Vogue’s No.1 wedding planner and caterer in 2018, and he regularly shares his expert hospitality advice on Instagram.