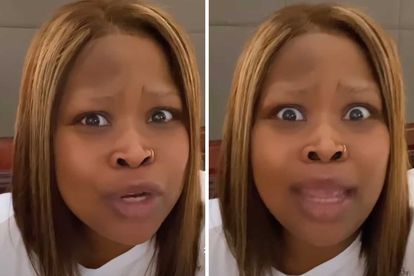 There’s nothing funny about racism in South Africa –  like Belinda Magor’s recent ramblings or the shocking incident at Hank’s Olde Irish Pub in Cape Town – but satirical comedian Coconut Kelz has done her best to make light of the serious situation.

The award-winning content producer – real name Lesego Thlabi – has shared a post mocking the two incidents and giving South Africans something to laugh over.

She said: “We are angry that you exposed racism…than the racism itself. But let me tell you why: Malema!”.

Coconut Kelz then accused Chris of having “nothing” to say during the Dischem employment equity controversy and being a “self-hating white.”

Quoting her “favourite WhatsApp poet,” Kelz echoed Magor’s words, quipping: “Ban the black man. They kill, worst than any pitbull could. They get away with it.”

Watch the full clip below…

In the clip, a man named Christopher Logan is seen confronting the “racist” owner of a pub – later identified as Hank’s Olde Irish Pub in Cape Town – about his decision to allegedly restrict people of colour from entering the establishment.

According to Christopher, the pub’s bouncer questioned his black friend Thabiso Danca, who claimed he was “not allowed” to enter “without a white person.” According to the bouncer, this was due to the pub’s right of admission.

Speaking to the owner, Christopher is filmed saying: “You think you have the right to tell whoever you want to come in, you don’t…You don’t have the right to discriminate against anyone in this country – it’s a crime”.

He added: “This is firstly a crime in this country. You exist in South Africa, where we have a deeply painful history of this”. He continues: “Do you think this is all right? Is this the practice of the business?”.

Becoming irate at the man’s denial, Christopher then orders the owner to apologise for his “racist” behaviour.

He adds: “Look at this man in the eye and apologise, is a good place to f**king start. Recognise the seriousness of this situation”.

The owner then offers a sheepish apology to Thabiso after Christopher threatens to inform the public about the racial attack.

Watch the incident play out below…