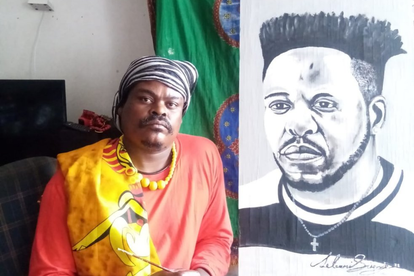 Rasta the Artist has honoured another South African celebrity with one of his famous portraits and this time, it was musician Sandile “DJ Citi Lytz” Mkhize. The rapper, who is the younger brother of the late rapper Linda “Prokid” Mkhize, was shot and killed in Soweto in the early hours of Monday morning.

Just a few days earlier, the artist also painted media personality and journalism Kuli Roberts who died on 9 February this year at age 49.

In the early hours of Monday 14 February, DJ Citi Lyts was murdered while hanging out with his friends in Dube, Soweto. After the news broke, thousands of his fans and industry friends paid tribute to the young artist. While the police issued this statement:

“Gauteng police have launched a manhunt for suspects after a musician was shot and killed in Dube, Soweto, in the early hours of Monday, 14 February 2022.

“Police were called to a murder scene in Dube at approximately 2am and on arrival they found a 32-year-old man that was lying on the ground with gunshot wounds on the upper body. He was certified dead by the paramedics.”

One of the people who also paid tribute to Citi Lyts is South African artist, Rasta. Taking to his Twitter page, the controversial artist shared a portrait he painted in honour of the Vura hitmaker.

“RIP CitiLyts_Dj 🎚️🎛️ your contribution and energy in music📻 will be missed👊🏾🪧✌🏾. Rest Ntwana. #Ripcitilyts #restinpeacedjcitilyts,” he captioned the post.

Many people headed to the comment section to share their condolences with the Mkhize family. Others however took to commenting on Rasta’s work which according to them, it has improved greatly.

“You getting better and better 🔥3masizakhe 📀🌐

“Thanks to @ChickenLickenSA Rasta is getting better…”

One Twitter user, @2koa_janneh commented on the rate of crime in the country and blamed the ruling party for a lack of control over the situation:

“Another life lost as crime and gun killings rise. The ANC had really done a great and wonderful job 🤞 in destroying black lives.”