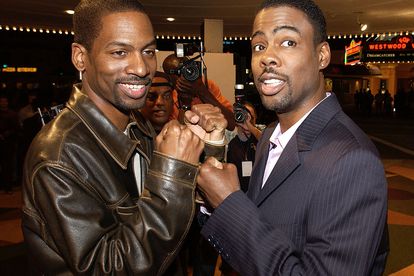 Tony Rock has clapped back at actor Will Smith, after he slapped his older brother Chris Rock at the Oscars last month.
Photo by Vince Bucci/Getty Images

Tony Rock has clapped back at actor Will Smith, after he slapped his older brother Chris Rock at the Oscars last month.
Photo by Vince Bucci/Getty Images

Chris Rock’s brother has broken his silence surrounding that Oscars slap by actor Will Smith last month in a recent stand-up comedy show.

Tony Rock, the younger sibling of the controversial comedian, recently took to the stage to share his thoughts on the incident, which has sent shockwaves throughout the entertainment industry.

Chris Rock himself has refused to comment on the incident, despite Will Smith issuing a public apology on social media and resigning from membership at the Academy Awards.

The 57-year-old star did however shut down a heckler at his own show who yelled: “f**k Will Smith”.

According to The Shade Room, Tony Rock addressed the Will Smith slap in his comedy routine last Friday.

He began his show in North Carolina by issuing a warning to the audience. He said: “If you think you gonna to walk up on this stage, this ain’t the motherf**king Oscars. And if you walk your a** up here, you ain’t nominated for shit but these motherf**king hands!

The younger brother of Chris Rock then seemingly addressed Will Smith directly, saying: “You gonna hit my motherf**king brother because your b***h gave you a side-eye?

Tony also revealed that he would not be accepting the actor’s apology. Following Will Smith’s IG apology, a fan asked Tony via Twitter, “Do you approve of the apology?”. Tony responded: “No.”

He also shut down speculation that Will Smith and Chris Rock made up after rapper Diddy claimed he had mediated between the pair.

Chris is the eldest of seven siblings, including brothers Andre, Tony, Brian, Kenny and Jordan, and sister Andi, 36. The siblings also share a late half-brother, Charles, who died in 2006.

Meanwhile, one of the original cast members of the Fresh Prince of Bel-Air has broken her silence surrounding the Oscars slap.

Tatyana Ali, who played Will’s younger cousin Ashley on the hit 90’s show, shared her thoughts on Twitter. In it, she revealed that whilst she did not condone violence, she did support Will Smith

“My heart aches for what has happened. I don’t know what caused that chaos & confusion, but I do know that Will has a big heart. I’ve seen him many times try his best to do what is right. I believe in him”.