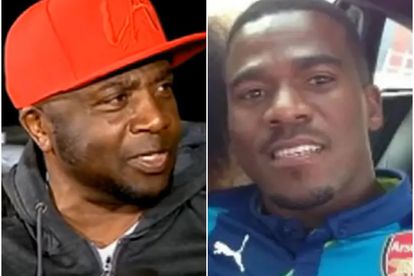 The arrest of Chicco Twala – the father of Longwe Twala, who was in the Voslooros home at the time of Senzo Meyiwa’s death – has raised eyebrows on social media.

The music veteran was released on R2000 bail on Tuesday afternoon. This, after he was charged with assaulting and pointing a firearm at city officials.

Senzo Meyiwa was shot and killed on 26 October 2014 at the home of Kelly’s mother Ntombi Khumalo. Longwe, Ntombi, Kelly, and her sister Zandie as well as Senzo’s two friends Tumelo Madlala and Mthokozisi Thwala were present in the home during the shooting.

According to reports, Chicco Twala was arrested after he allegedly assaulted and pointed a firearm at two City Power technicians who were fixing an outage in his neighborhood.

The 58-year-old businessman – who confessed to using a “toy gun” – claims he believed the two men were cable thieves responsible for causing a blackout. The incident took place at the Bloubosrand home in Johannesburg north on Sunday evening

He also revealed to Sowetan Live that he was texting them using his cellphone, whilst being detained in the police holding cell.

But following his arrest Chicco Twala also referenced Senzo Meyiwa – the soccer star who was shot and killed on 26 October 2014. Chicco has been accused of “shielding” his son since the incident.

He told the publication via SMS: “My arrest is a victory to me and defeat to all the evil people who portray me as a mafia who is behind the Senzo Meyiwa’s killing. My arrest is proof that I am not above the law”.

He also name-dropped Minister of Police Bheki Cele. Chicco added: “Haters on social media claim that I bribed judges, police including police minister Bheki Cele whom I don’t even know to protect my son. Where will I get that kind of money to bribe all these powerful people?”

Five men accused of Senzo’s death are currently on trial for murder in the Pretoria High Court. But despite Bheki Cele claiming that the state has a “watertight” case against the suspects, the public – including Senzo’s brother Sifiso – have voiced their disbelief.

Following the release of the Netflix documentary Senzo: Murder of a Soccer Star, Twitter users have accused Longwe and Kelly of being allegedly involved in Senzo Meyiwa’s murder.

Following Chicco Twala’s arrest and the alleged leak of his text messages to SowetanLive, tweeps shared their views on what they think went down.

@Ntombenhle124: “Chicco’s arrest is just another publicity stunt, trying to shift the focus on Senzo Meyiwa’s case. This statement made things worse.

@RosemaryThando_: “Chicco Twala is holding onto Brenda Fassie’s music rights even in her grave. He even went to court to try to stop Bongani from making a film about his mom’s life. Chicco manages to sabotage Bongani, imagine what he does to those who can’t speak for themselves?”

@_FancyFace00: “Chicco texting while being in a jail cell says alot about this staged arrest. Why would you be arrested for using a toy guy?Beggie [Bheki] Cele think we are still in grade one”

@MbaliRantlha: “Why is he even trying so hard to convince us that he is not above the law? What’s eating him? By him being arrested and still having his cellphone to release a statement from a jail cell, that’s being above the law if you ask me. Not everyone can get that kind of courtesy”

@BetweenyouI: “Chicco Twala thinks we are idiots like Kelly, Longwe, and Mosia. This so-called “arrest” is a cheap PR stunt that’s supposed to divert us from the Senzo Meyiwa case. He wants us to believe that Longwe didn’t use his gun to kill Senzo. Sies to Chicco”