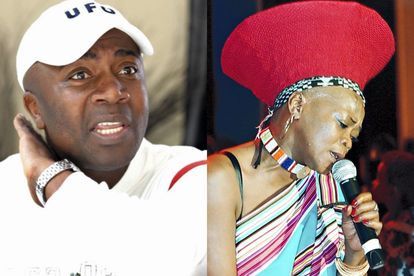 Brenda Fassie’s long-time music producer Chicco Twala will reportedly be at the forefront of the late star’s upcoming documentary by Netflix. Images via Twitter @theyanosmag @TouchHDOnline

Brenda Fassie’s long-time music producer Chicco Twala will reportedly be at the forefront of the late star’s upcoming documentary by Netflix. Images via Twitter @theyanosmag @TouchHDOnline

2022 marks 18 years since the passing of South African singer-songwriter, Brenda Fassie. It was reported on Wednesday 11 May that Brenda’s long-time music producer, Chicco Twala, will be at the forefront of an upcoming Netflix documentary that will honour the singer.

Twala topped Twitter’s trending list on Thursday 12 May following the news, with many tweeps expressing that they would not be tuning into the documentary because he is involved. One tweep claimed the producer was “malevolent” to the Vuli Ndlela singer and her family.

ALSO READ: Chicco Twala to helm Brenda Fassie film, but what of her son Bongani?

CHICCO TWALA ON WORKING WITH BRENDA

“Her association with ordinary people was great, she used to socialise with everyone irrespective of who you are. Fame and money meant nothing to her,” he recalled.

Taking to Twitter, entertainment commentator Phil Mphela shared that Twala would be at the forefront of Brenda’s upcoming Netflix doccie.

After Mphela announced the news, several tweeps explained that they were not pleased about Chicco Twala leading Brenda’s upcoming Netflix documentary.

One tweep wrote: “We are not discounting the work Chicco did with Brenda Fassie, they were incredible. However, we also cannot be blinded to just how malevolent he was to Brenda and her family.”

“Netflix is conducting business with people who have openly exploited artists and their families. That guy has done so much damage,” wrote transgender activist, Yaya Mavundla.

“With Chicco Twala leading the documentary, I’m not watching. That man is evil,” wrote another tweep.

‘MY INHERITANCE WAS STOLEN FROM ME’

Speaking to Drum in 2021 about his reality show Finding Bongani, Bongani Fassie said he had been quiet for too long about his mother’s passing.

“Issues about my mom’s death, people speculating that she overdosed on drugs and how I kept my mom’s legacy intact, but my inheritance was stolen from me and how I was belittled by people I was working with very closely; wolves who came in sheep’s clothing. All that is on the table.

“I have been quiet for too long and have never been given a platform to honestly and candidly share my life and what I have been through.”