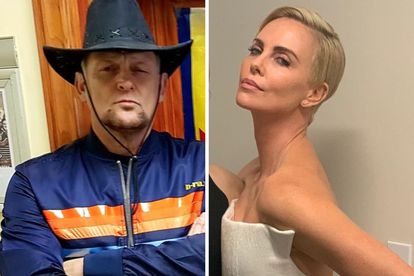 Singer Steve Hofmeyr has clapped back at actress Charlize Theron’s comments about the Afrikaans language.
Images via Twitter
@steve_hofmeyr
@charlizeafrica

Singer Steve Hofmeyr has clapped back at actress Charlize Theron’s comments about the Afrikaans language.
Images via Twitter
@steve_hofmeyr
@charlizeafrica

Hot on the heels of actress Charlize Theron describing her mother tongue – Afrikaans – as a “dying language”, many South Africans have begged to differ. And Afrikaans singer Steve Hofmeyr is one of them.

The Benoni-born star who now lives in the US shared her controversial opinion about one of SA’s 11 official languages in an interview with podcast SmartLess.

Chatting to podcast hosts Sean Hayes, Jason Bateman, and Will Arnett, Charlize Theron spoke about learning English when she moved to the US at the age of 19 years old.

Needless to say, Charlize and her comments about Afrikaans went viral on home soil.

Responding to the drama, singer and activist Steve Hofmeyr tweeted: “I am #1of44 that is proud to speak Afrikaans”.

He added to Tshisalive: “If it managed the first heart transplant it’s a useful enough language for me. Afrikaans is a marginalised language which is alive and well, regardless”.

And Steve is not the only prominent figure lambasting Charlize.

He posted: “As South Africans, we’re extremely proud of Charlize and everything she has achieved…but we’re also very proud of our diversity and our amazing and beautiful official languages, of which Afrikaans is one. It’s not a ‘dying language’, and it’s not only spoken by 44 people.

He added: “It’s spoken by millions of people; there are new songs and poems being written every day, movies made etc. It’s a language with its roots in several languages and cultures, including Dutch, Malay, Indonesian and our indigenous San languages. Just FYI.”

Meanwhile, Twitter users were left debating Charlize’s comments on the social media platform. Whilst some agreed with the actress, others proudly defended Afrikaans as an indigenous language.

Here’s what a few tweeps had to say:

@NalaThokozane: “Afrikaans has a strong association with Apartheid. This statement was made by Charlize Theron to appease Hollywood. I do not concur with her. As with all other languages, the Afrikaans language must be preserved”

@ZwaneSiguqa: “Our beloved Charlize is wrong on this. Afrikaans is a South African language. It is one of ours’. Same as isiZulu,& Sesotho. These are our languages as a nation and we must keep them alive for future generations. We must not let them die! It would be a cultural tragedy”

@Juleanor: “Wow what a disrespectful comment to the millions of South Africans of all ages, races & stations in life that speak Afrikaans as their first language. Maybe she needs to spend “real” time in all regions of SA, and not just glitz street”

@TVwithThinus: “Really saddened by Charlize Theron’s misguided and false comments today. She will be losing a lot of fans and supporters who’ve cheered her on and watched her content over years”