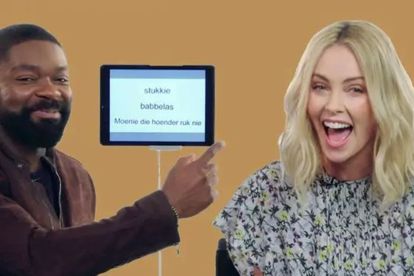 South African-born actress Charlize Theron did her “moedertaal” no favours in a recent episode of the SmartLess podcast. Our girltjie from Benoni’s statement that Afrikaans is “not a very helpful language” and is only spoken by “about 44 people”, has been met with shock and outrage in Mzansi.

In the interview with hosts Sean Hayes, Jason Bateman and Will Arnett, the Hollywood star also claimed Afrikaans is a “dying” language:

Listen to the full interview HERE.

But what about using your native tongue as a “secret language” to gossip with your mother, Gerda? And the joy of swearing in “Die Taal” and throwing around some slang? Oh, and that  #LearnAfrikaansWithCharlize venture on Facebook…

The School of Good and Evil actress has confessed in the past that she speaks in her native tongue to her mother when they don’t want people around them to understand what they’re saying. Helpful indeed.

Back in 2018, Theron opened up in an interview on The Late Late Show With James Corden about the time when she and her mother were waiting for their luggage after a flight to New York.

The two vented their frustration at a “rude man” in Afrikaans, thinking he would not understand their “secret language”. Turns out the man was Afrikaans himself! Oops…not very helpful.

That same year, Theron and her Gringo co-star, David Oyelowo, had a ball teaching each other slang words from the Afrikaans and Yoruba languages in a video for Vanity Fair.

Even though Oyelowo is British-American, he was born in Oxford to Nigerian parents of Yoruba ethnicity, according to SA People. Theron taught him a few Afrikaans slang words, including the very useful “babbelas“, “stukkie”, “pomp” and “Moenie die hoender ruk nie”. Take a look…

Seems like 2018 was quite the year for Theron to “gooi” Afrikaans in Hollywood. In an appearance on First We Feast, the award-winning actress dropped some spicy language while eating hot wings during the interview.

Please note this video contains strong language that may be offensive to some.