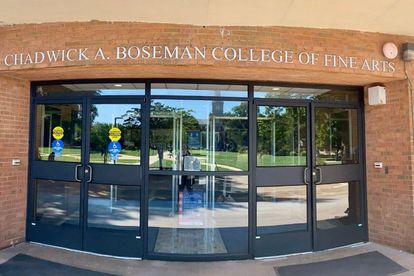 Chadwick Boseman has been honoured by Howard University on the first anniversary of his passing. The Black Panther star graduated from the school in 2000, and this week, the university officially unveiled the Chadwick A Boseman College of Fine Arts, which was named in honour of the late actor following his death on 28 August 2020.

In the caption of a video on Instagram, the university wrote:

Howard University first announced plans to rename its college of fine arts after the Oscar-nominated actor in May this year, in recognition of the star’s considerable efforts in advocating for the college to be reinstated, both while attending the school and after he graduated.

His wife, Simone Ledward Boseman said in a statement at the time of the announcement:

I am extremely pleased that Howard University has chosen to honour my husband in this way and elated that Ms. Rashad has accepted the role as Dean. Chad was a very proud Bison — both Howard and Ms. Rashad played integral roles in his journey as an artist. The re-establishment of the College of Fine Arts brings this part of his story full-circle and ensures that his legacy will continue to inspire young storytellers for years to come.

Last week, several stars paid tribute to Chadwick on the anniversary of his death, which was marked on 28 August.

Not a day goes by bro… Love and miss you but I know you still with us.

One year without Chadwick Boseman. Thank you for watching over us. We miss you King.

There was also a tribute from Lupita Nyong’o, who said:

I did not know I could miss both his laughter and his silence in equal measure. I do, I do… One year after his passing, the memory of @chadwickboseman remains this alive in me.