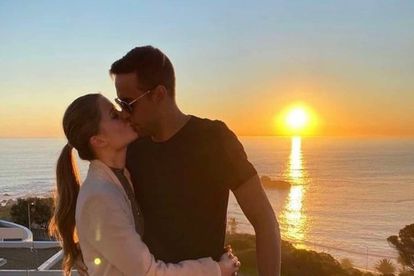 SA Olympic swimmer Chad le Clos and his stunning girlfriend Jeanni Mulder have celebrated their anniversary with a loved-up post on social media.

The good-looking couple — who celebrated their third year together — gushed over each other on Instagram.

This follows Le Clos, South Africa’s most decorated Olympian of all time, recent disappointing performance at the Tokyo Olympics where the butterfly swimmer left empty-handed.

Mulder, however, still has a chance to be crowned Miss SA on 16 October in Cape Town as she features under the Top 10 finalists.

ALSO READ: Chad le Clos: I lost fair and square, but I’ll be back

CHAD LE CLOS: ‘LOVE YOU SO MUCH’

Chad le Clos couldn’t hide his utter infatuation with the blonde beauty – who was recently announced as part of the Miss South Africa Top 10 finalists – when he posted a pic of them kissing near the beachfront.

Jeanni — a model and English language student — posted the same pics on her page calling Chad her “best friend”.

Meanwhile Jeanni – who has been vlogging about her pageant adventures is hoping to use her platform as a Miss SA hopeful to bring awareness to gender-based violence (GBV).

Apart it’s not just Chad le Clos and his beauty queen who are toasting to eternal love; former Miss SA Liesl Laurie and her fiancé Mmusa Mthombeni are also celebrating their anniversary with soppy snaps.

The couple – who announced their engagement, and relationship in June – revealed that they have been dating for a whole year already!

“To a glorious year of being in love with you! Happy anniversary standwa sam (my love)” Mmusa captioned a pic of the two embracing each other

The hot couple spent their day at a spa and ended it with a very fancy dinner.

“To many more. To giggles. To laughs. To love. To life!” he added of his lady love.

Aaah, to be young and in love!