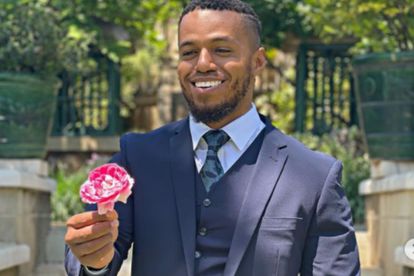 Actor and engineer, Cedric Fourie who is popularly known for his role as Lehasa Maphosa on SABC 1’s educational soapie, Skeem Saam recently got candid about love and life with Sowetan.

Fourie who recently played the role of the charming Dr Mthembu in e.tv’s medical drama, Durban Gen also revealed that it was a dream come true for him to play a doctor.

GETTING TO KNOW FOURIE

The father of one revealed in the interview that he’s got an obsession with wanting to have a baby with someone else and marrying his partner.

He told the publication that he often jokes about his fetish with his partner about having a baby with someone else.

It is unclear who the actor is dating at the moment as he has kept his love life private since he was previously reported to be dating YouTuber, Lasizwe and media personality, Zari Hassan in 2020.

He’s also kept mum about the identity of his current baby mama whom he often posts about on social media.

The actor also revealed in the Q&A interview that his love language is words of affirmation.

Fourie believes people need to communicate verbally not just through actions because actions can be misinterpreted.

“I think as people we have to be good at communicating verbally.”

“We need to say what we mean and mean what we say.”

When he was asked which moment he’d pause in his life, he said he would pause his baecation in Thailand.

He also tells the publication that he enjoys teasing his colleagues at work and that he’s not as serious as people think.

“A lot of people think I’m this guy with muscles who’s all serious only to find out that I am all about laughter.”