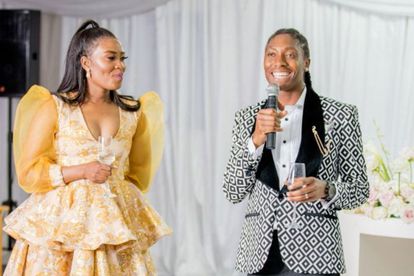 Two-time Olympic gold medalist Caster Semenya and her wife, Violet Raseboya, have welcomed their second bundle of joy into the world! Taking to Twitter on Sunday 26 June, Semenya shared a glimpse of the baby’s feet with the couple’s wedding rings.

The middle-distance world champion and Violet also have a two-year-old daughter, Oratile. They have never shown their daughter’s face on social media and the same would probably apply to their second child if the black-and-white “feet photo” is anything to go by…

In July 2021, Semenya shared a heartwarming Instagram post announcing that she and Violet were expecting their second child together. In the photo, the middle-distance runner, her wife and their oldest daughter posed for a picture showing off Violet’s baby bump.

“With love and grace, our family grows. This precious soul that God decided to bless us with. We all can’t wait to meet YOU!”. wrote Semenya.

The 31-year-old runner shared the first photo of their newborn on 26 June, leaving tweeps gushing over the baby!

The picture was simply captioned “Joy” with a black heart emoji.

TWEEPS GUSH OVER THE BABY

Reacting to the photo of the baby, tweeps shared heartfelt messages to Caster Semenya.

“We already know those little feet are going to be on the track soon,” wrote one tweep.

“This is easily one of the most beautiful pictures to exist, what!?” wrote another tweep.

“One thing about Caster and Vio, they’ll have a baby, okrrr!”

In January, Violet took to Instagram to celebrate her 13-year anniversary and five-year marriage anniversary with Caster Semenya.

“Thank you for holding me through everything and anything and may your birthday be as special as you are to me in every way. Enjoy your day and I love you so so much,” wrote Violet.

The road ahead for Caster Semenya

The athlete finished in sixth position at the Championships in Mauritius.

In an interview with BBC Sport Africa on Sunday, Semenya, who is barred from competing in her preferred 800m race by World Athletics’ differences of sexual development (DSD) rules introduced in 2019, said the World Championships this year wasn’t really one of her targets.

She revealed that she has a four-year plan to move to road running, but that it would take time to reach her peak.

“It takes four years for a distance runner to be great. I’m trying to figure it out. It’s like a baby trying to learn how to walk,” she told the BBC.