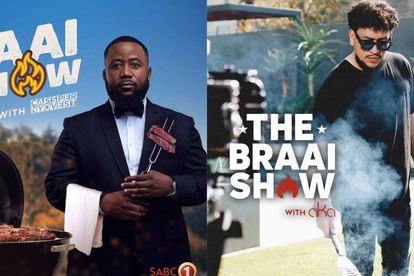 Cassper Nyovest has recently been teasing fans about an upcoming television show that would be airing in a few weeks’ time. One would’ve thought Cassper would be getting his own original show, but he is taking over from AKA as the host of The Braai Show.

‘THE BRAAI SHOW WITH CASSPER NYOVEST‘

The Siyathandana hitmaker took to Twitter today (9 August) to announce that he would be the new host of The Braai Show. The show has officially been renamed The Braai Show With Cassper Nyovest’.

“Cassper Nyovest is taking over The Braai Show on SABC1! It’s now called #TheBraaiShowWithCass . Don’t forget to use the hashtag!!! Broadcasting dates will be announced by channel soon!!! Le Plane ilandile!! ABASHWE!”, he tweeted.

According to entertainment commentator Phil Mphela, AKA will retain his executive producer title as a 50% owner of the show.

Mphela gave an update on The Braai Show on 9 August, mentioning he had reached out to AKA’s team for clarity on his involvement in the show.

Mphela posted a statement from law firm Tailormade Legal Solutions, who acts on AKA’s behalf, and judging by the reply, it seems as if the rapper is considering legal action regarding the matter.

A portion of the statement reads: “Although not surprised by the opportunism, Mr Forbes does regret the lack of integrity and legal foresight by those who have sought to proceed with this incompetently sanctioned plan.”

Tailormade Legal Solutions concludes that no further comment will be given on the matter.

Twitter was certainly taken aback at the news that Cassper would be the new host of The Braai Show. Some did however use the opportunity to congratulate Cassper on his new television venture.

One Twitter user wrote, “I respect the guy who made this call. It’s not about replacing AKA but its a move that’ll increase the fanbase of this show. It’s just a tactic to promote the show and they got the right guy in cass. “

The successful rapper mentioned that he is looking for a worthy opponent for a boxing match, after Prince Kaybee fell through as an opponent. The two have constantly butted heads on Twitter but to everyone’s disappointment, the matchup won’t be taking place.

“The 990 selling, I’m back to training tomorrow.  Done shooting a TV show. Time to break a sweat and drop a lil bit of weight. Wish I was training for an actual fight for a lil bit of a push. Need to get a worthy opponent,  someone with some sort of a name. Itll be fun. But who?”