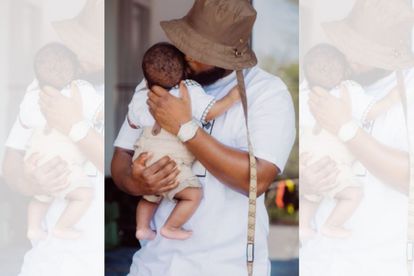 The South African rapper and songwriter Cassper Nyovest recently had his seven-month-old son Khotso christened and shared the lavish experience on social media.

Refiloe Maele Phoolo, who is more popularly known by his stage name, announced in June 2020 that he and Thobeka Majozi were expecting their first child together. The couple then later announced the birth of Khotso in September 2020.

“My son is getting baptised today at our family church. Such a beautiful feeling. My father is part of the church choir by the way. Today he is singing for his grandson,” wrote Cassper on Instagram.

According to Times Live, a series of snaps from Cassper’s Instagram Stories gave fans a glimpse of the white and gold decor. One of these pictures includes a tall cake with a sign below that read “Khotso’s Christening”.

He also posted a video of his uncle dancing alongside the caption “I got it from my uncle”.

Cassper later revealed that in his house the baby is king, and they can only watch certain stories on the television.

“Worked my whole life so that I never have a boss and guess what ? I ended up having a boss in my own house!!!! This is all we watch now!!! All hail King Khotso!”

Earlier this year, Cassper shared a sweet father-and-son moment that left fans in awe. In the video, Khotso is fascinated with his father’s beard and can be seen pulling Cassper’s lips while the rapper sarcastically asks him what he was doing.